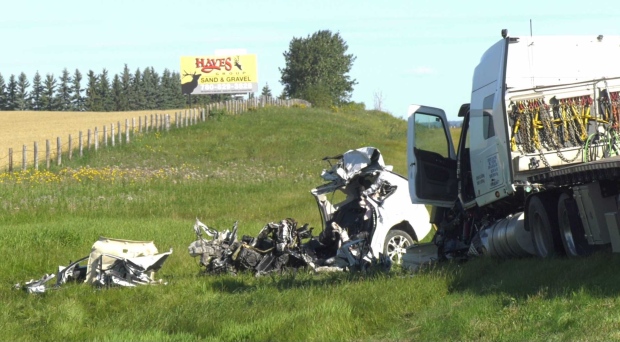 EDMONTON — A portion of Highway 2 in Sturgeon County was closed Tuesday morning after a fatal crash between a semi and SUV.

RCMP, EMS and firefighters were called around 11:15 p.m. and said in an update a few hours later “all occupants of the SUV” had died at the scene just north of Highway 651. At the time, it wasn’t known how many people were in the vehicle.

Shortly before 11 a.m., Mounties confirmed one male and two females, all of unknown age, were in the SUV when it is believed to have crashed head on with the northbound semi.

RCMP were still working to confirm the names of the trio.

The semi-truck driver was not injured.

A collision analyst is investigating alongside Morinville Mounties. An RCMP spokesperson said prior to the crash, Mounties had received several complaints about an SUV being driven erratically in the Athabasca, Westlock and Morinville areas.

The SUV and semi crashed before police were able to track down the SUV at the centre of the complaints.

On scene, a semi with a trailer was seen partially in the ditch. The white vehicle in the ditch near it had been totalled.

Highway 2 was expected to remain closed between Highway 651 and Township Road 580 until noon. The scene is west of the town Legal, about 50 kilometres north of Edmonton.