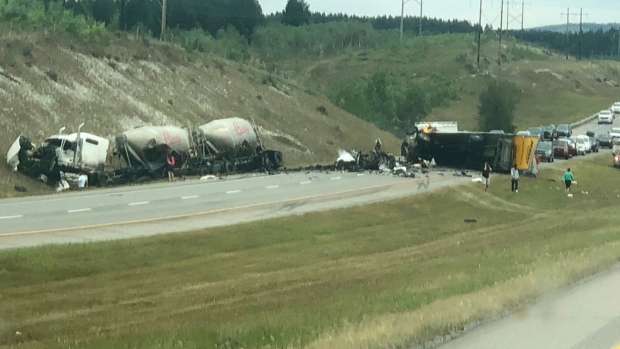 CALGARY — The Trans-Canada Highway reopened Wednesday evening after a collision involving a semi, two vans and a car earlier in the day left two people dead, three others injured and prompted officials to close a section of the highway to traffic.

According to an update issued by the RCMP around 2:30 p.m., the incident was initiated by an eastbound cube van that crossed the freeway into the westbound lanes, where it ran head-on into a car.

At the same time, a westbound semi behind the car was unable to stop and rear-ended it.

A westbound cube van traveling behind the semi then rear-ended the semi.

Two people were pronounced dead on scene and EMS officials confirm three patients were transported to hospital by ground ambulance in serious but stable condition.

There was no word on the condition of the driver of the semi or the occupants of the westbound cube van.

Around 8:40 p.m., RCMP issued a statement that the highway had been cleared for traffic to resume travel westbound on Highway 1.