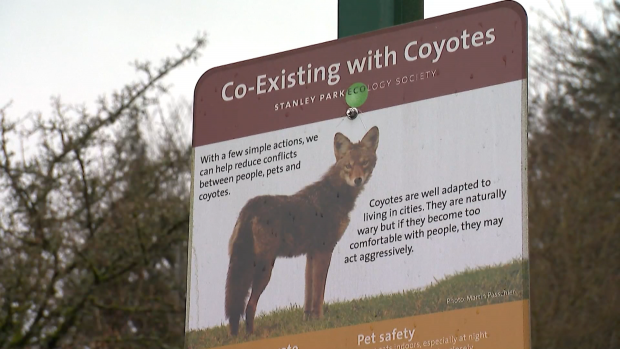 VANCOUVER — Another coyote attack has been recorded in Stanley Park, and this time, a five-year-old was injured.

The child, Matias Aguilar, and his family – who are visiting from Edmonton – went to the park Tuesday night planning to take pictures at Prospect Point.

However, moments after the family stepped out of their vehicle, those plans were quickly altered.

“A Coyote came dodging out of the path and jumped my little guy, took him to the ground and bit his leg,” recalled Matias’ mom Brandi Aguilar.

She says the Coyote took off but then returned shortly after.

“At that point, my adrenaline hit and I chased the guy, threw rocks at him and screamed at him,” she said.

Matias was taken to hospital where he received stitches, but is expected to fully recover.

However, Brandi says as tourists they weren’t properly made aware of the ongoing coyote situation at the park.

“We’re not watching the news, we’re on vacation,” she said. “If we saw signage or anything we have obviously would have avoided the area.”

The BC Conservation Officer Service issued a statement about the attack.

“No one wants to see anyone injured by a coyote, especially a child, and we are thankful he is recovering.”

The park has seen a rash of coyote attacks over the past year, with several in July, including one that sent a toddler to hospital.

After that incident, four coyotes were killed by conservation officers in Stanley Park, but attacks continued.

While the park remains open, the BCCOS said it urges the public to stay away. Those who are in the park should use caution “as there is a high risk of encountering an aggressive coyote.”