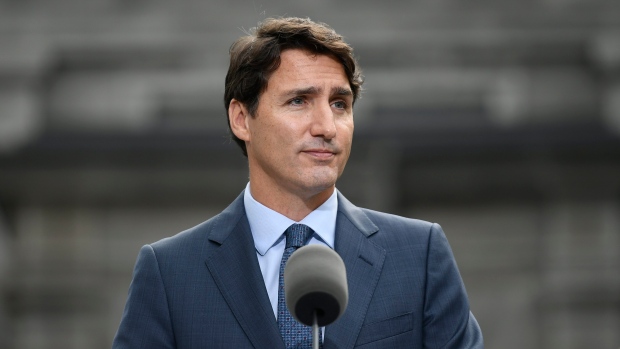 OTTAWA — Prime Minister Justin Trudeau is expected to launch a federal election campaign this Sunday, with the vote set to be held as early as Sept. 20, sources have confirmed to CTV News.

After months of speculation over the prospect of a pandemic election, sources, speaking on a not-for-attribution basis, said that Trudeau is planning to visit Rideau Hall this weekend and ask Gov. Gen. Mary Simon to dissolve the 43rd Parliament and draw up the 338 writs, triggering a fall vote. However, sources indicated that it is still possible that the prime minister could adjust his plans.

If the campaign kicks off this Sunday, with an election day on Sept. 20, the 2021 federal election would be 36 days in length, the shortest possible permitted under elections law. Triggering the election means that Canadians would be in for at least five weeks of campaigning, seeing the federal party leaders crisscrossing the country and pitching themselves, their candidates, and their platforms, under ongoing COVID-19 public health restrictions.

While the next fixed election date isn’t until October 2023, minority governments rarely last the full four years between elections. In the 2019 federal election, voters reduced the Liberal majority to a minority and since then there’s been a series of shakeups on the political scene, from the election of new opposition leaders and recent invigoration over social justice issues, to the ongoing global pandemic that has upended much of life as Canadians knew it.

In his anticipated post-election call remarks from outside Rideau Hall on Sunday, Trudeau will have to explain to the electorate why he felt it was necessary to put the country into an election now, while reopening and vaccination efforts are still underway amid fears over a Delta-driven fourth wave of infections.

The news was first reported by Reuters, and came just as Canada’s Chief Public Health Officer Dr. Theresa Tam held a press conference announcing that the country has now entered a fourth wave of the pandemic, driven by the Delta variant and mostly impacting the unvaccinated.

“We have been closely monitoring increases in COVID-19 activity across the country. The latest national surveillance data indicate that a fourth wave is underway in Canada and that cases are plotting along a strong resurgence trajectory,” she said.

There are currently more than 13,000 active cases in Canada, more than double the number from late July.

Both Conservative Leader Erin O’Toole and NDP Leader Jagmeet Singh have spoken out against a snap election, though all sides have already been engaging in pseudo-electioneering all summer long. Parties have also been pushing ahead with nominating candidates, putting in place key campaign staff and sorting logistics like renting campaign planes and buses, while pledging to follow all local pandemic precautions.

“While Justin Trudeau wants to just act like it’s over, it’s not over, and people are still worried,” Singh said on Thursday, unveiling his party’s campaign platform on Thursday morning. “And if Justin Trudeau was listening to people, and their concerns, and their worries he would not be holding a selfish summer election.”

Recent polling data from Nanos Research and commissioned by CTV News indicated that the majority of Canadians aren’t that enthusiastic about an election right now.

“There’s not a lot of enthusiasm to have a federal election at this particular point in time, and I think the fact of the matter is, for most Canadians, they’re just happy to try to put the pandemic behind them, and to start to connect with loved ones, [rather than] think about listening to politicians ask for their votes,” said Nanos Research’s Nik Nanos in an interview with CTV News on Aug. 3, when the survey data was released.

Canada’s Chief Electoral Officer Stephane Perrault has spoken favourably of having a longer writ period to allow Elections Canada to have a longer runway to get all elements of a national election in place, but the agency says it is nevertheless ready to safely conduct a vote.

Should the Governor General agree to dissolve Parliament, all outstanding business in both the House of Commons and Senate that was not passed when both chambers adjourned in June will die, and all parliamentary committees essentially cease to exist, leaving it up to the next government to restart a legislative agenda. The government, and the bureaucracy in each federal department and agency, will enter a “caretaker” mode in which major decisions are limited.

During the process of dissolving a Parliament there are typically three steps: dismissing the senators and members; calling the next Parliament and ordering the writs to be issued; and setting the date for when Parliament will next meet after the writs are returned with the results. Writs are written orders instructing the returning officer in each of the 338 federal ridings to hold an election to select a member of Parliament.

Heading into the campaign, here’s the current seat breakdown in the House of Commons:

A party needs to win 170 seats for a majority government.