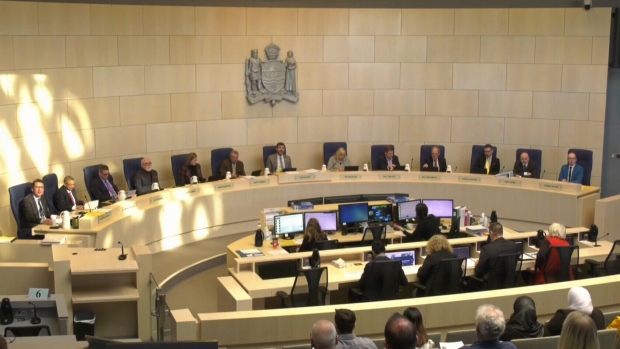 EDMONTON — Edmonton city councillors have missed fewer than five per cent of meetings on average over the past term, but also have widely varying rates of participation in serving on boards, committees and leading city initiatives.

CTV News reviewed attendance records for all 12 councillors and the mayor at city council and committee meetings since the start of their term in October of 2017 through July of 2021.

Each councillor and the mayor was also sent an eight-question survey about council attendance. Mayor Don Iveson as well as 11 of 12 councillors responded — all but Coun. Mike Nickel.

The numbers show meeting attendance ranged from between 92 to 100 per cent, with Coun. Andrew Knack having perfect attendance.

“It is one of the most important parts of what we do,” said Coun. Knack of attending meetings.

“Our council and committee meetings are where we can bring forward specific ideas to bring about positive change.”

The average among all councillors and the mayor was above 95 per cent.

“It is a core responsibility for a councillor to show up to scheduled meetings,” said Coun. Dziadyk, who had one absence over the nearly four-year span.

Over that time, councillors were scheduled to attend between 313 and 365 meetings, depending on what committees they serve on and how often those committees meet.

Most councillors indicated a 90 per cent attendance rate as constituting ‘good’ attendance.

Not all absences are the same, as some are noted for city business or were flagged ahead of time.

The numbers reflect the percentage of attendance based on required appearances for council and committee meetings.

Councillors are required to attend every council meeting as well as committee meetings of which they are a member.

They can attend committee meetings of which they are not a member but are not required to.

“It helps me keep up with what is happening across the city,” said Coun. Henderson of attending committees that he is not a part of.

Most councillors agreed that while a 100 per cent attendance record is admirable, it’s also unrealistic for most.

Councillors cited work on external agencies, boards or commissions as well as personal and health emergencies as reasons for missing meetings.

Most respondents also stressed that the quality of contribution in meetings is important to consider as well.

“Doing just the essential can look like higher attendance but not really measure the work a councillor is doing,” said Coun. Bev Esslinger.

“Attending a meeting’ is different from actually participating thoughtfully at a meeting and being present for votes,” said Mayor Don Iveson through his office.

“It’s not enough to attend a meeting at the beginning and then drop off or not participate in a vote.”

Most respondents indicated a majority of their work, ranging from 60 to 80 per cent, occurs outside of council and committee meetings.

“There are also endless requests for meetings from groups or individuals representing communities, non-profits, business and other interests,” said Coun. Scott McKeen.

“Constituents often want to meet, as do folks representing the arts, or multicultural communities or agencies helping the disenfranchised and disadvantaged.”

Others pointed to obligations beyond meetings.

Councillors are assigned to lead or establish city initiatives on issues of importance.

Some are also expected to serve as a city representative on various boards and associations, including the Police Commission, Alberta Urban Municipalities Association, Federation of Canadian Municipalities and Green Municipal Fund.

The majority of absences from city council meetings occurred over the first part of the term.

Attendance also appeared to improve during the pandemic with the normalization of virtual meetings, though it’s unclear if that alone is responsible for the rise.

Prior to COVID-19, there were no provisions for video meetings and councillors were generally only allowed to attend remotely by phone if he or she were out of the city.

“Attending virtually is much easier, as we have learned, and much more efficient,” said Coun. Aaron Paquette.

“It causes issues gauging eye contact with presenters,” he said of remote meetings.

“Attending virtually should continue to be allowed, but should be the rare exception and not the rule.”

Others pointed out that virtual meetings were more open to the public, enabling attendance and participation by citizens who may not have been able to attend in person.

A child care facility near or in city hall was also suggested by some as a way to improve attendance.

All councillors acknowledged the importance of being at meetings, but agreed there’s more to attendance than simply being there.

“Do they ask engaged questions? Are they trusted by their colleagues to represent the interests of the city in other forums? Have they been able to accomplish things for their constituents?,” asked Coun. Sarah Hamilton.

“Those are metrics that tell you more about the efficacy of a councillor.”