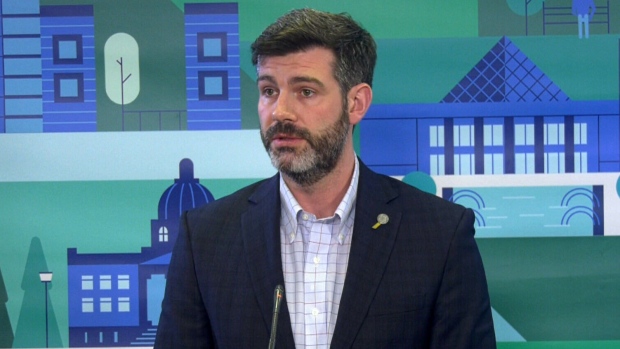 EDMONTON — Edmonton’s mayor is frustrated that Alberta Health modelling being cited as one reason the province is considering ending isolation, contact tracing, and mandatory masking has not been released.

Mayor Don Iveson made the comments Thursday after an emergency advisory committee received a presentation Thursday about COVID-19 situation in Edmonton.

The committee heard from Dr. Michael Zachary, Alberta Health Services (AHS) medical officer of health, who said the provincial modelling has not been shared with him and other colleagues.

City administration said modelling has not been shared with them either.

Several councillors expressed frustration and concern at the meeting that data being presented by the province as showing Alberta could move from a pandemic to endemic response was not publically available, especially to aid policy decisions.

It’s troubling to learn that the experts at AHS are not regularly provided with the data/science by Alberta Health that is used to make provincial health policy. It’s important for all experts and the public to have access to that data. #yeg #yegcc #COVID19AB #ableg #abpoli

Last week, the province’s top doctor, Dr. Deena Hinshaw, said the decision to drop the pandemic response measures was made after her team reviewed data on age-specific outcomes related to COVID-19, vaccine effectiveness and modelling on the transmissibility of the Delta variant and related health outcomes.

“Our cases, with the data that we still have, show there is a rising trend,” Iveson said. “We would all like to see the modelling and understand what lies ahead.

“I share the frustration that I heard from a number of members of council about the fact that, that modelling has not been made public,” he added. “That vacuum fills itself with a lot of speculation which is not helping anybody make good decisions, including us.

“I think it would be helpful for that information to be made public. It is odd that AHS hasn’t seen that data.”

He said the province was creating an “awkward” position for AHS as it responds to the pandemic and helps inform municipalities on their policy positions.

“Our bias at the City of Edmonton is disclose and share and educate and talk through,” Iveson said.

“That would certainly be our default approach in a situation like that. But at the end of the day those decisions are up to other people.”