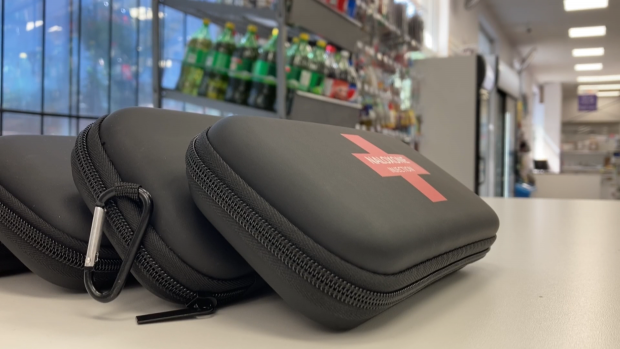 EDMONTON — The opioid crisis in Edmonton is forcing some to take action themselves as they train others to use life-saving naloxone kits.

The community of Alberta Avenue is training residents on how to use the kits and the business association in the area is encouraging its 200 members to stock naloxone kits.

“Three weeks ago we had 10 overdoses on Alberta Avenue, all within a one block radius of each other before noon on a Tuesday,” said Jay Ball, executive director for the Alberta Avenue Business Association.

A local pharmacy is helping distribute the kits and providing training.

“The challenge is that once we are closed (at night), the need is still out there,” manager Pryank Patel said.

Patel shared how people will often break-in to the locked garage bins looking for prescription opioids, only to find empty bottles.

Data released by Alberta Health showed that in the final week of July there were 162 opioid-related calls paramedics responded to in Edmonton, the highest amount for any week on record.

That number represents more than triple the amount of calls during the same week last year.

Keith Kakeeway, a member of the local street team says he often encounters people who are unresponsive – even in the area park.

He estimates having to revive around 50 people – in the past year alone.

“It’s never gotten easier to use one of these (naloxone kits),” he added.

Ball said only a handful of businesses have signed up so far but the association hopes more will join the program.

They hope the more kits and training is distributed, the better the odds they can help someone in need.

“That’s the other reason I do this, somebody doing this for me is what saved my life,” Kakeeway said.