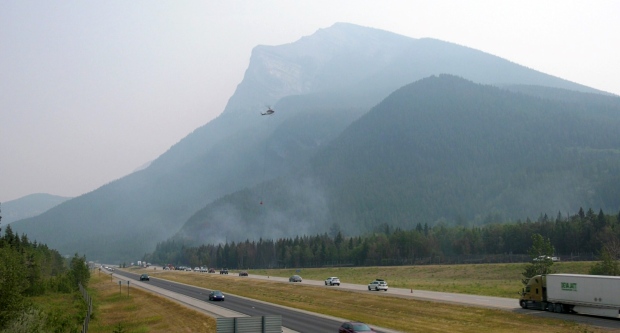 CALGARY — Alberta wildfire crews are continuing to battle a large grassfire about 10 hectares in size that was sparked in a wooded area just east of Canmore, between Deadman’s Flats and the Lac Des Arcs area.

The flames were first spotted Friday afternoon and continued to burn along the east side of the Trans-Canada Highway with minimal spread overnight.

So far, 25 firefighters, three helicopters and air tankers worked to contain the fire, with hot and dry conditions continue to play a major factor. The fire was out of control until around 5 p.m. Saturday when it was reclassified as being held.

According to Alberta Wildfire, being held means a wildfire is not expected to grow anymore.

“We do have some wind blowing from the west gusting up to 40 kilometres per hour, which has been challenging,” said Josee St-Onge, provincial information officer with Alberta Wildfire.

“The temperature is forecasted to reach at least the 30s, but at this time there’s a blanket of smoke in the area that’s actually keeping temperatures down, and helping suppress some of that wildfire activities.”

As of Saturday afternoon, Highway 1 has reopened, but drivers should be aware that the eastbound exit at Deadman’s Flats remains closed to traffic and is causing some congestion.

No buildings have been damaged in the fire, but residents of Deadman’s Flats like Ashley Whittington packed a bag just in case she needed to be evacuated.

“It was honestly a little nerve-wracking, your concern is that the fire is going to jump the highway and the fact that everything happened so fast and so quick,” she said.

“Once the bombers came down and put the red fire retardant down, you felt a little more at ease, but I didn’t sleep very well at all last night and was worried we’d get a knock on the door and have to evacuate.”

Other locals like Kristian Bogner were amongst the first to witness the fire on Friday afternoon, even before fire and police responded.

“It was crazy, I would say there were three-storey high flames burning at one point,” he said.

“I was extremely worried and I didn’t know how it was going to progress because I saw the grass on fire and three separate fires burning on the side of the highway.”

The cause of the wildfire at Deadman’s Flats was determined Saturday evening to be human-caused.

“Our investigators have determined that the wildfire was human-caused, but there are no additional details at this time,” St-Onge said in a statement. “Their investigation continues.”

Alberta Wildfire called in two fire investigators to search the area and originally deemed it to be suspicious since there were no reported lightning strikes.

The Canmore Fire Department remains on standby in the event any sort of evacuation efforts may be necessary should conditions change.

Canmore Fire Department Deputy Chief Keri Martens says the number one concern for her team right now is making sure the public is aware that a fire ban is in effect for the entire Calgary Forest Area.

“The hot weather is definitely drying things out, increasing the potential for a wildfire and it does make things more severe,” Martens said.

“So just take care, be really careful with your outdoor activities and be aware of the local fire restrictions and other bans that are in place right now.”

The fire danger in the Calgary Forest Area where the Deadman’s Flats wildfire is located is extreme.

Alberta Wildfire is asking the public to take precautions as 88 per cent of wildfires in 2020 were human-caused.