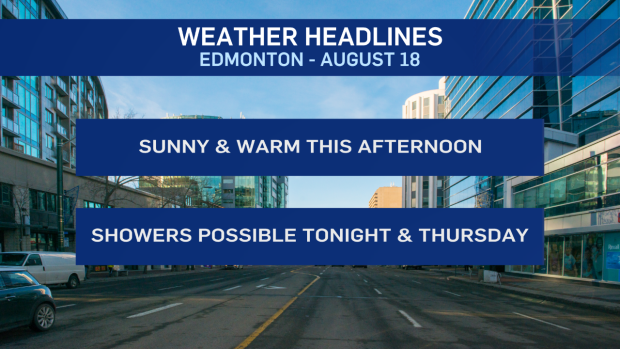 EDMONTON — A chilly morning in central and northern Alberta.

Edmonton dropped to 8 C and that’s the coolest temperature since mid-June.

EIA hit a low of 1.4 degrees and there were a few locations (including Edson, Rocky Mtn House, etc.) that hit zero this morning!

Looks like it’ll be a nice rebound in temperatures through the day as almost all of central and northern Alberta gets back to around average (highs near 20).

Edmonton stays sunny through the day and we’ll likely hit a high of 23 or 24 degrees this afternoon.

Wind may pick up a bit later today, so…just a bit breezy this afternoon.

An area of low pressure will make it’s way through northern Alberta today.

That’ll bring clouds and showers to the northwest corner of the province this afternoon and then areas from Fort McMurray north get a chance of showers this evening/tonight.

We’ll see some clouds move into the Edmonton area this evening and there’s a good chance of some showers or light rain overnight (after midnight) and early Thursday morning.

I think most of the day Thursday will just be “mostly cloudy” in and around Edmonton.

But, there will be some hit-and-miss showers that develop in the afternoon in north-central Alberta.

That afternoon precipitation should be fairly spotty, though.

Thursday/Friday will be our cool days this week with highs in the 17 to 20 degree range.

Saturday/Sunday should be a bit warmer with highs in the 19 to 23 degree range.

The questionmark for Sunday is precipitation timing. I don’t think we have a very good handle on that just yet.

I’m putting it as more of a late-day/evening risk. But, we’ll watch that and update it as necessary over the next few days.

Wind becoming NW 20 with occasional gusts to 30 this afternoon.

30% chance of an afternoon shower.

40% chance of a late-day shower or thunderstorm.

60% chance of showers or periods of rain overnight.