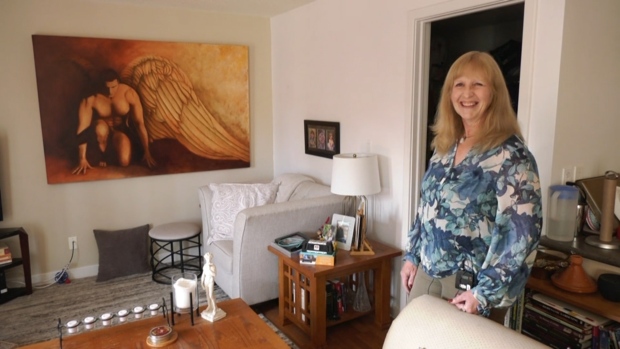 EDMONTON — One of nine paintings that was stolen during a break-in last year was found nine months later by a dumpster, in perfect condition.

One of them was her cherished painting of Archangel Michael.

“It had a really long story,” she said. “It had such meaning for me and a real journey of love.”

Now nine months later, her painting has been found.

“I was in shock and I started crying,” said Moore.

Moore said the company that owns Artshub 118 received a voicemail from a man saying his girlfriend had her painting. After getting in touch with the couple she met up with them to retrieve it.

“I didn’t know what to expect, the painting was gone for nine months and it was… perfect,” said Moore. “I just couldn’t believe it, I was overrun with so much joy.”

The man’s girlfriend recently found the painting by a dumpster, not knowing anything about it and brought it home. A friend of hers saw the painting and told her it had been stolen last year.

“I’ve always felt that it was just gone, that it was never coming home. And so I came to terms with that loss.”

She said having the painting stolen led to a very difficult time in her life emotionally and physically, as the artwork represented people she’s loved and lost.

“I suffered a heart attack when I was first informed it had been stolen, it broke my heart – literally,” said Moore. “So to have it back, it’s so much more than oil, paint and canvas, it’s a lot of love.”

Moore said the return of her painting is bittersweet, as there are still eight paintings missing from the co-op that were stolen the same night as hers.

“We have no leads, we have no more information, we don’t know who stole mine, I wish we had more idea of where these pieces of art have been and then we’d be able to dig deeper into it.”

She says 16 artists live in the Artshub 118 building, and no one displays their art in the shared hallway now because they’re too afraid of another break-in.

“I’m overjoyed that my painting is here but it hits home that my community here is still missing their work,” said Moore.

Edmonton police believe the break in happened the evening of Nov. 8. Anyone with information about the break-in or the missing art work can contact EPS at 780-423-4567.