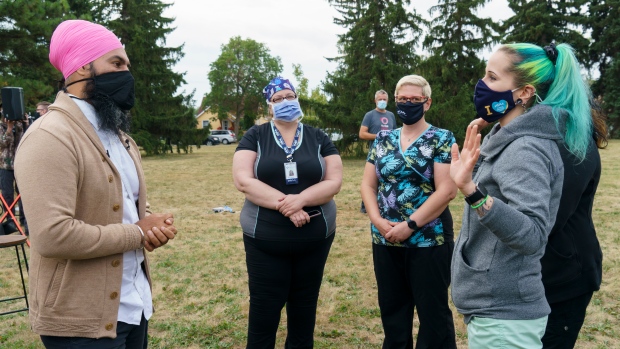 EDMONTON — NDP Leader Jagmeet Singh says he saw his largest crowd of supporters Thursday afternoon in Alberta where the party only has a stronghold over one riding.

He started his day near the East Edmonton Health Centre to speak about health care and also capitalized on Kenney’s declining popularity amid the pandemic.

The 42-year-old NDP leader also addressed the multiple violent attacks against Black Muslim women in the province all while attempting to paint Kenney and Trudeau with the same brush.

“We’re seeing cut after cut that is driving health care workers out of the province,” Singh told reporters as cars honked at him while he stood next to a busy Edmonton road.

“These cuts at the provincial level are only made worse because for years and years federal governments have been cutting health care as well. The Conservatives cut health care, and then Trudeau kept in those same cuts.”

Throughout the pandemic, Kenney has been grappling with a public outcry over temporary bed closures and reports of dozens of nurses and doctors leaving the province due to wage cuts and other rollbacks. Public health experts have called what’s happening in the province a health care crisis.

Singh said unlike his counterparts, he wants to actively work with any province or territory that wants to invest in health care.

He promised to create a national $250 million Critical Shortages Fund to address the shortage of nurses and health care workers across Canada.

Singh also addressed the rising rate of hate crimes across the country.

Over the last eight months, several Muslim and Black women who wear a hijab in Alberta have been targeted, violently assaulted, threatened and harassed while walking down the street or waiting for a light rail train.

He took a shot at Trudeau again while walking back to his campaign bus, saying the root cause of the increasing number of hate crimes across the country is online radicalization, which the prime minister has talked a lot about but hasn’t done much to make any changes.

“Tackling online hate is a way to get at some of the root causes. A lot of misinformation and some of the conspiracy theories comes from social media posts that radicalized people with misinformation,” Singh said.

“The other piece is making sure we use hate laws appropriately. Absolutely there’s problems around making sure when a crime is identified as a hate crime, that it’s prosecuted that way ΓÇª that’s something that absolutely needs to happen.”

During his morning announcement, Singh stood next to Heather McPherson, the MP for the only NDP riding in Alberta, Edmonton Strathcona, while he insisted his relationship was solid with former New Democrat premier Rachel Notley.

She looms large in the federal NDP’s quest to retain its Alberta seat and perhaps expand into other ridings.

The two hold opposing views on the Trans Mountain pipeline and Notley has been vocal about their disagreement with Singh, but the NDP leader said the two chat regularly.

“We know that people in Alberta benefit from more New Democrats both provincially and at the federal level,” Singh said.

“We have far more in common and we’re going to build on those things.”

A spokesperson for the provincial NDP caucus said Notley is committed to creating jobs in Alberta by modernizing the province’s electricity grid to net-zero carbon emissions by 2035, and reaching that goal economywide by 2050.

“She is open to working with all municipal, provincial and federal leaders who share that goal,” said Benjamin Alldritt, director of communications for NDP caucus.

Singh ended his campaign stop in Edmonton with a visit to NDP candidate Blake Desjarlais’ campaign office in the Edmonton Griesbach riding.

“This is the largest gathering we’ve had in this whole campaign so far,” noted Singh, as dozens of his supporters cheered NDP.

He seemingly then took another jab at Kenney and said if the premier’s government wasn’t able to stand up for Albertans during one of the worst moments in human history, then the conservatives will never stand up for Canadians.

This story was produced with the financial assistance of the Facebook and Canadian Press News Fellowship.