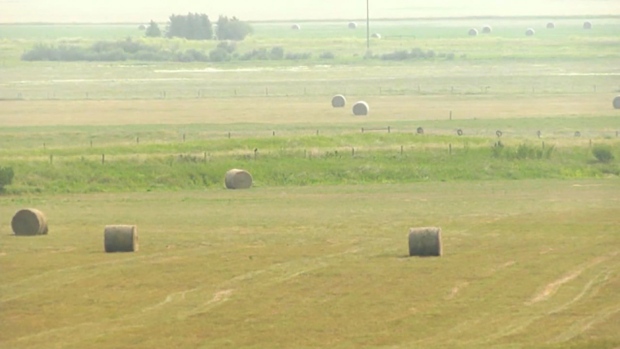 Kneehill County councillors declared an agricultural disaster after hearing a staff report describing worse than a one in 100 year drought in some parts of the municipality.

The decision was made at the Aug. 17 regular meeting of council.

Councillors heard a report from Shelby Sherwick, manager of parks and agriculture services, describing the staff’s efforts to gather information from local producers on the effects of this summer’s drought.

“The 2021 season has yielded very challenging environmental conditions in the region, with lack of seasonal rain, and a prolonged heat wave in June and July leading to prolonged drought conditions and impacts on sources of feed and crop yields in Kneehill County,” stated Sherwick’s report to council.

“The Alberta Crop Report conditions from July 27, 2021 shows … crops in the central region listed as 16.1 per cent in ‘good’ to ‘excellent’ condition, compared to the five year average of 75.1 per cent,” the report stated.

Sherwick noted that the Rural Municipalities Association (RMA) has guidelines for municipalities to follow when considering an agricultural disaster.

Sherwick stated county staff spoke to producers across Kneehill County and the drought has had varying effects depending on location, but it has affected every part of the county.

She noted that all agricultural commodities have been affected.

Going into more detail, Sherwick stated information coming into the county office noted extremely hot and dry conditions in the south and eastern parts of the municipality in particular, pastures becoming depleted with surface soil moisture ratings are 44 per cent “poor” and 29 per cent “fair.”

Sherwick also showed councillors a colour-coded crop report map of moisture levels that included a number of areas described as having moisture levels worse than what would be considered a one in 100 year drought.

Coun. Ken King asked how the moisture data is collected and Sherwick answered she thought they use weather station data.

King responded that some of the weather stations used are “really inappropriate, particularly in the south east part of our municipality.”

King stated that the impacts are even worse than what the map showed.

Other councillors voiced concern about inaccurate moisture reporting, and staff stated they will look into how and where weather stations are located.

Both Reeve Jerry Wittstock and Coun. Debbie Penner agreed, stating some of the descriptions on the map showing “green” areas were wrong, as the drought was as bad there as anywhere else.

Coun. Glen Keiver stated he was concerned that livestock producers were going to be neglected as a result of an impression that grain farmers are having more trouble.

Keiver noted the conditions for livestock are atrocious. “The creeks have quit running, the grass is dead,” said Keiver.

King stated he’s concerned about livestock too and wanted to point out the livestock producers are in worse shape than the grain farmers.

Penner also stated the creeks have virtually stopped running in some areas and wondered if the county could expect help from the Bigelow Dam.

“We have no water and that is the biggest problem this year,” said Penner.

Wittstock stated the livestock feed situation is shaping up disastrously, noting producers are describing feed cuts of two tons per acre which is very light, while hay prices are 13 cents a pound which translates to $260 per ton. “Tough to find, to boot,” said the reeve. Sherwick confirmed producers across the county reported low first cuts of hay with no second cuts.

Councillors unanimously agreed by resolution for staff to proceed with declaring an agricultural disaster in Kneehill County.

“We’re well below average in our area and it’s going to be a difficult winter,” said Christie.