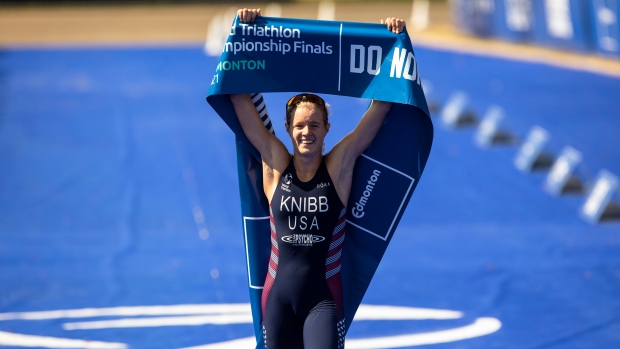 Bermuda’s Flora Duffy became the first triathlete ever to win Olympic gold and the triathlon world championship in the same year on Saturday, with Norway’s Kristian Blummenfelt repeating the achievement hours later on the men’s side in Edmonton.

Duffy, 33, led in the standings by a 467-point margin headed into Saturday’s grand final and got a fast start diving off the pontoon under pristine conditions.

But she was unable to fend off winner Taylor Knibb of the United States, who put on a gutsy performance on the bike to seize an astonishing 2:44 lead after the transition into the run.

The 23-year-old, who brought home silver with the U.S. mixed relay team in Tokyo, grinned as she approached the finish line, winning the race in 1:54:47, with France’s Leonie Periault finishing second and Duffy finishing third.

Periault and Duffy were running shoulder to shoulder but the Frenchwoman pulled away from the Bermudan on the third lap of the run.

The performance was enough to net Duffy a record-equalling third world title, however, becoming the most decorated female athlete in the history of the sport weeks after she delivered Bermuda its first-ever Olympic gold.

“It was a very hard race. I had a pretty mediocre swim,” said Duffy. “It’s very hard to come and try to do this series off the back of winning the Olympics.”

On the men’s side, Blummenfelt, who delivered Norway’s first medal in the sport in Tokyo, once again produced a late surge for the win.

Belgium’s Marten Van Riel was in third – and nearly half a minute ahead of Blummenfelt – after the swim but the Norwegian picked up the pace on the bike and charged through the final two kilometers of the run to clinch the win by a hair in 1:44:14.

“Before this season I was calculating I was getting old and I had no titles,” said the 27-year-old Blummenfelt. “Now I’m Olympic champion and world champion.”