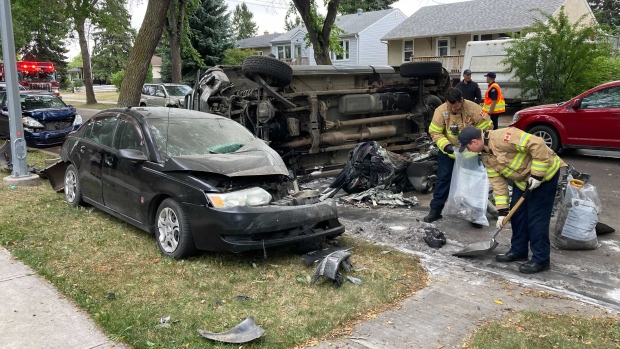 EDMONTON — A 22-year-old is facing dangerous and impaired driving charges after a Dodge pickup truck collided with several parked vehicles in the Hazeldean neighbourhood Sunday morning.

Police officers responded to reports of a collision near 98 Street and 70 Avenue around 9:45 a.m.

A Dodge Ram pickup truck was eastbound along 70 Avenue when the driver hit multiple parked cars. Police say three cars and two motorcycles were struck by the truck before it flipped onto its side.

The driver fled the scene on foot but officers were able to locate and take him into custody.

No one was injured in the incident.

Additional charges are pending as the pickup truck was stolen, police say.

“It’s pretty rare to see anything like this in a low-speed neighbourhood, especially near a school zone,” Fire Capt. Josh Brown told CTV News Edmonton at the scene.

“There was a bit of a fire that we had to extinguish and the oil pan in the pickup was broken so there was quite a bit of oil to clean up.”