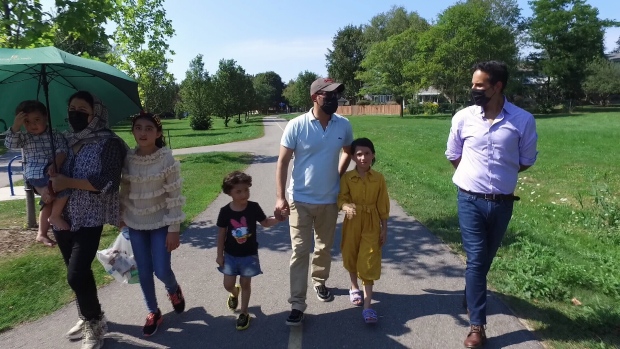 TORONTO — One of the first families to land in Canada after escaping the Taliban in Afghanistan are speaking out about the life-and death ordeal they faced just weeks ago.

Ehsan Saadat and his family were able to walk through a Toronto park after completing their mandatory COVID-19 quarantine period, telling CTV National News their first observations after landing in their new home country.

“My first impression when I landed in Toronto, I just saw that everything looks calm, looks safe,” said Saadat.

As a researcher whose previous work was presented to Canadian officials and aid groups, Saadat was eligible to apply and secure spots for himself, his wife and four children on a rescue flight — and not a moment too soon.

“I was scared,” he said of living in Afghanistan with the news of the Taliban taking city after city. “My wife was scared, I was scared.”

And while Canada offered him and his family a lifeline to escape, the process of getting on a flight out of Kabul had extremely high stakes.

Saadat received an email from Canadian authorities on Aug. 5, detailing how the family could access their rescue flight – with one major condition.

“It’s important that you and your family members do not share information beyond your immediate family until after you arrive in Canada,” Saadat said, reading the instructions warning him not to tell anyone about their leaving.

Saadat kept the secret from his extended family, though it pained him.

“I remember when my brother took us to the embassy, and he hugged my children – that time was difficult,” he said, getting noticeably emotional.

The family were only able to bring some wedding photos and other small mementos from their life in Afghanistan, things that Saadat said were to show his children as they grow up so they won’t forget where they came from, and to answer their questions in the future “where are we from and what were our customs.”

Now Saadat says his immediate goal is to try to find a job. He holds a Master’s degree in educational administration.

“I don’t want to be a burden for the government,” he said, adding that his children have big dreams of their own.