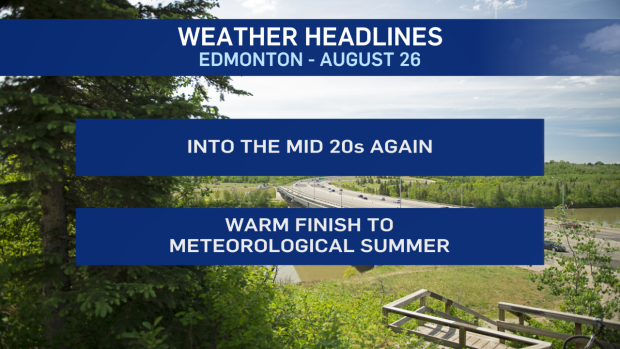 EDMONTON — Temperatures are a bit warmer in the Edmonton region this morning and after getting to a high of 23.5 C yesterday, we should be in the 24 or 25 degree range this afteroon.

Sunny skies this morning will give way to some clouds this afternoon/evening.

There’s a risk of some spotty showers and possibly a thunderstorm or two in western Alberta this afternoon.

The chance of seeing some of that precip push east through the Edmonton area isn’t zero. But, it’s pretty low.

I’ll keep the slight risk of a scattered shower in the forecast for early this evening. However, most of the city and surrounding area should stay dry.

The same goes for tomorrow. A mix of sun in Edmonton with a slight risk of a scattered shower in the area.

But, most of the city should stay dry for most (probably all) of the day.

The foothills and east-central Alberta have the best chance for seeing showers (and a possible thunderstorm) on Friday.

The weekend is shaping up nicely with highs in the low to mid 20s under partly cloudy skies.

This will be our last weekend of meteorological summer.

And…since a few people have asked about that…let’s take a second to explain the difference between meteorological seasons and astronomical seasons.

Meteorological seasons line up better with the weather and start at the beginning of months.

Astronomical seasons are based on the earth’s orbit around the sun and the tilt of the earth’s axis.

That orbit and tilt mean the sun’s most direct rays are over different parts of the earth at different times of the year and that gives us the seasons.

Astronomical summer starts at the Solstice, when the sun’s most direct rays are at their northern-most point, right over the Tropic of Cancer.

But, that happens around June 20 and the Autumnal Equinox (when the sun’s direct rays pass over the equator) is Sept 22 this year.

That doesn’t make a lot of sense when it comes to the actual weather and that’s why we have meteorological seasons: