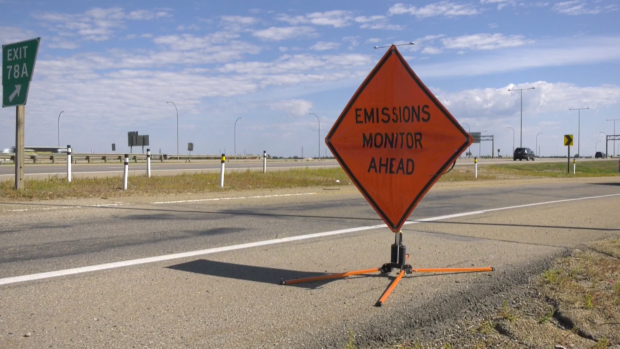 EDMONTON — A new study gathering vehicle emission data in Edmonton is aiming to better understand how vehicles are contributing to air pollution throughout the province.

The Clean Air Strategic Alliance (CASA), a multi-stakeholder group of scientists, not-for-profit organizations, and various levels of government is leading the study.

“It’s measuring the amount of light, infrared and ultraviolet light that is absorbed by those pollutants,” said Niranjan Vescio, director at Opus Inspection. “The more that’s absorbed, the more we know is present in the exhaust.”

During the data collection process, a photograph of each vehicles’ license plate is automatically captured.

Andre Asselin, Executive Director at CASA, says the photos are collected in order to gather data on the make, year, and type of fuel that’s being burned by the vehicles.

“There’s no personal data being gathered at all,” Asselin said. “There’s strict rules governing that sort of behavior.”

“Whatever is on the registration of your car – minus any personal information – we’ll pair that data with the emissions as you drive through it to give us an idea of where things are at.”

Asselin says CASA and Opus Inspection, a vehicle inspection company, began their first project testing vehicle exhaust in 1998, which resulted in a program to encourage drivers to ditch their older vehicles.

Since 1998, CASA and Opus Inspection have been able to build on their technology, which is now able to pull data from the exhaust of large diesel trucks.

The project is currently in its data collection phase aiming to test around 40,000 vehicles in Alberta.

“It’s information gathering for decision makers and for people really just to be able to understand what kind of vehicles are doing the worst kind of emmissions, said Asselin.

“And for people who are conscientious of that, they can make a decision based hopefully on the data we provide.”

CASA hopes to release its findings sometime in 2022.

With files from Amanda Anderson.