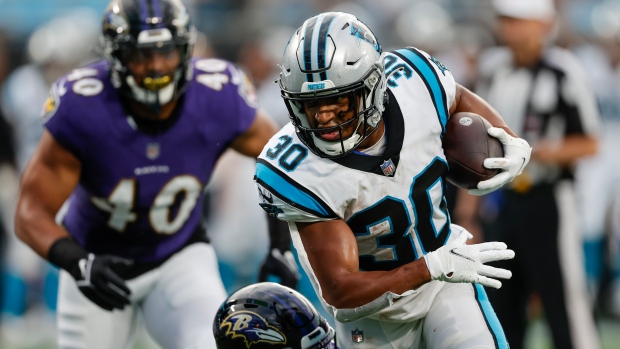 EDMONTON — Five years ago, Chuba Hubbard was leading his Bev Facey Falcons to a lopsided opening week win at the start of the high school football season.

The weekend after next, he’ll face a tougher task when he hits the field for the Carolina Panthers, and becomes the first Edmontonian in more than three decades to play in a National Football League game.

“I sometimes have to catch myself. Just kind of slow myself down and be like, ‘man, you’re blessed. Look at how far you’ve come,’” Hubbard, 22, said. “My life has changed so much since five years ago.”

Making the NFL marks the latest round on his roller-coaster ride into pro football’s highest level.

After emerging as a high school star in Sherwood Park, he became a college football sensation over four years at Oklahoma State University, and was selected by Carolina in last spring’s NFL draft.

“You never really think of it in that scope,” said Hubbard. “It just kind of happened so fast.”

Hubbard looks to be the first Edmonton-area born-and-raised player to make the NFL in 32 years, and the first since punter Hank Illesic kicked for the then-San Diego Chargers for one season in 1989.

Wide receiver Brian Fryer was the last Edmonton-born-and-raised position player to make the NFL, playing one season for Washington in 1976.

“I’m definitely blessed to have my city, my family, even my country always supporting me and having my back. I’m the proudest Canadian,” said Hubbard.

“I’m always looking to represent where I’m from. I’ll always hold that high.”

Hubbard burst on to the pro football scene after his four years at OSU.

In 2019, he led the sport in rushing, picked up the nickname “Canada’s Cowboy,” and became the fourth ever Canadian to receive votes for the prestigious Heisman Trophy, awarded to college football’s most outstanding player.

Despite struggling to duplicate the sensational stats of the season before, he chose to forego his final year of college eligibility to enter the NFL draft.

“It was my time,” said Hubbard. “When you feel you’re ready, you’re ready and I thought I was ready.”

His last college season also saw him speak out on social justice issues, including publicly challenging his coach Mike Gundy for his support of a far-right news network, and calling for the resignation of an Oklahoma County district attorney over the treatment of protesters.

“The biggest thing for me is to be someone that always believes in doing the right thing,” Hubbard said.

“Stand up for what’s right,” he said. “I’ll always be someone to do that.”

Hubbard’s 2020 struggles set back his draft stock, but Panthers coach Matt Rhule knew him from college when he coached for OSU’s conference rival, the Baylor Bears.

“I couldn’t sit there and watch you run wild on me all those years at Baylor and not take you when I had the chance,” Rhule said at the draft, referencing Hubbard’s 173-yard rushing performance against his Bears team two years ago.

Hubbard soon after signed a four-year $4.2 million contract after being selected in the draft’s fourth round, 126th overall.

In Carolina, he finds himself second or third on the running back depth chart, behind Christian McCaffrey, a two-time All-Pro who is among the league’s superstars but was also injured twice last season and played in only three games.

“He’s the best running back in the league,” Hubbard said. “I get to come into the league as a rookie and learn from him.”

How much game time he’ll see this season remains unclear, but Hubbard says he’s focused on team goals and has a simple standard for measuring success.

“Win a championship,” he said.

While he knows “there’s adjustments to be made” at the pro level, Hubbard also says his path from Sherwood Park to Charlotte, N.C., has readied him for the challenges to come.

“I’ve been preparing for this moment my whole life to get to this position,” Hubbard said.

“There’s been some ups and downs but overall I’m feeling pretty good.”