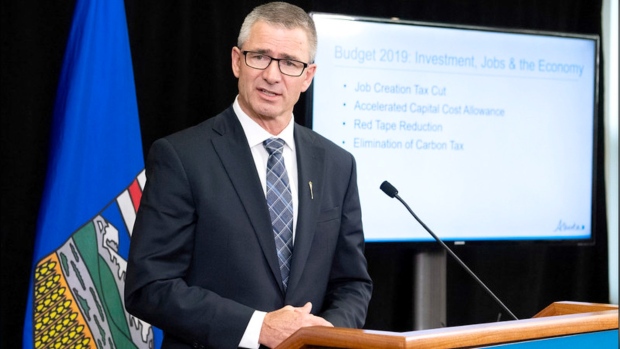 EDMONTON — Alberta’s deficit and revenue have both bettered budgeted projections over the first three months of the fiscal year, according to new numbers released in the province’s first quarter update Tuesday.

The deficit is now forecast at $7.8 billion, or $10.5 billion lower than budgeted for.

Revenue for 2021-22 is now projected to reach $55 billion, more than $11 billion over budget projections.

The update cites improved oil prices, job creation and increased exports for the rise in revenue.

But, it also warns that rising Delta variant cases in the ongoing COVID-19 pandemic as well as raised production targets from foreign oil producers could once again drive oil prices back down.

“We built in the expectation that we will be continuing to battle the pandemic in the weeks and months ahead,” said Toews.

Expenses are forecasted at $62.7 billion, up $800 million from the budget.

“We will continue to bring spending in line with that of other provinces, attract more investment and get Albertans back to work,” he said.

“Our goal is to thoughtfully and carefully … align our public sector remuneration with that of comparative provinces.”

The province’s most recent budget was produced in February and predicted an $18-billion deficit and taxpayer-supported debt of near $100 billion.

Alberta will pay $2.6 billion in debt servicing costs this year with the total taxpayer-support debt expected to reach $105.7 billion by the end of March 2022, according to the update.

The province has added 73,000 jobs since the start of the year with the unemployment rate falling to 8.5 per cent.

Its economy is now forecast to grow by 6.7 per cent this year, with much of that coming from a projected $9.4 billion increase in resource revenues.

The update cites the impact of the pandemic on government spending, noting it required “additional  dedicated spending to support people, business and economic diversification, as well as reducing revenue substantially.”

The last fiscal year ended in March with a $17-billion deficit on $60 billion in spending.