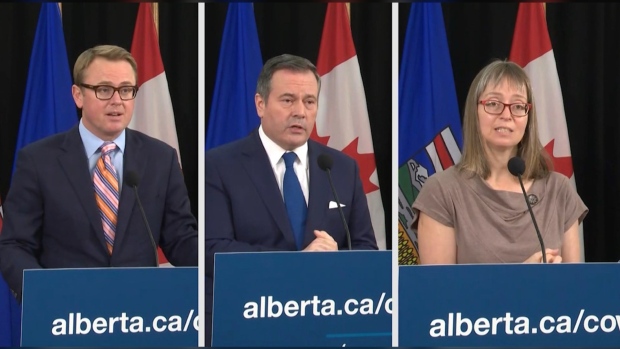 EDMONTON — Amid an influx of COVID-19 cases and hospitalizations, Alberta is reinstating measures it got rid of just two months ago as well as offering a $100 vaccination incentive.

Starting Saturday, masks will be mandatory across the province in all indoor public and work spaces. Schools will continue to set their own policies.

Licensed businesses will be required to end alcohol service at 10 p.m.

And, Alberta will pay unvaccinated residents $100 to get the COVID-19 shot.

The announcement on Friday came with a plea from Premier Jason Kenney for the 30 per cent of eligible unvaccinated Albertans to “do the right thing.” Their choice to not get vaccinated, he said, was jeopardizing the health care system, whose ICU capacity was at 95 per cent province wide that morning.

He disagreed the $100 incentive was a bribe or reward to people who had so far ignored medical and scientific advice.

“I wish we didn’t have to do this, but this is not a time for moral judgements. This is a time to get people vaccinated,” he said.

“I’m much more concerned about protecting our hospitals than I am about some abstract message that this sends.”

He also believes the financial incentive will reduce barriers for lower-income residents.

PANDEMIC OF THE UNVACCINATED

Kenney characterized the spread of the Delta variant in the unvaccinated population as “ripping its way through this group at an aggressive rate.”

According to provincial data, since Alberta fully reopened July 1, unvaccinated adults between the ages of 20 and 59 have had a 50-to-60-times higher risk of hospitalization. More than 80 per cent of all COVID-19 hospitalizations since July 1 have been unvaccinated people. Of the current 114 ICU patients, 91 per cent are unvaccinated.

Health Minister Tyler Shandro said he and his colleagues “honestly thought” more of the public would be vaccinated by September when they lifted restrictions in July. That decision, he said, was based off data from the United Kingdom which suggested the Delta variant caused a spike in cases but didn’t raise severe outcomes the same way.

The modelling from which the province crafted its reopening plan that launched on July 1 was released Friday.

It shows Alberta is approaching the model’s “high scenario” which would see more than 1,700 cases a day within the next two weeks.

It also indicates the number of patients in hospital is also rising quicker than anticipated, with as many as 300 patients in ICU and nearly 700 non-ICU hospitalizations listed as a “high scenario” that could play out over the next three weeks.

The premier also warned Friday that the modelling’s projected late-September peak could be “longer and later.”

But the officials expect Friday’s measures to be enough to keep COVID-19 from overrunning the hospital system.

“This wave, we anticipate, will be different from previous waves as it is a smaller group of the population who is susceptible,” Chief Medical Officer of Health Dr. Deena Hinshaw said.

She called a list of measures she brought to cabinet for consideration, including those announced Friday, a “reasonable balance” of the impacts of COVID-19 and public health orders.

‘FOR THE LOVE OF GOD’

All officials made another attempt to convince vaccine-hesitant residents of the safety and efficacy of the COVID-19 shot.

“If you just haven’t gotten around to if, for the love of God, please get vaccinated now,” Kenney begged.

The mask and alcohol rules are the only hard lines being set by the Alberta government.

It is also recommending, where possible, employers do not plan to bring employees back to the office.

And officials encouraged unvaccinated people to limit their social visits to close contacts: no more than two families totalling 10 people. Vaccinated Albertans do not need to do the same.

Non-urgent surgeries are being postponed in all five health regions, too.

Alberta will not mandate vaccines at the public level, Kenney reiterated.

He remarked earlier in the press conference: “The reality is that we as a government don’t get to choose how the virus behaves or how many people choose to protect themselves against it. We just have to find a way of limiting the damage that it causes, especially to our health care system.”

Hinshaw declined to say whether or not she supported a vaccine passport, telling media instead she believed policy decisions should be made officials elected by a population.

“It’s clear that in other populations when a requirements have been introduced that uptake has increased, but at the same time that is not without some impact. So again, those kinds of decisions need to be made taking into account local context as well as what’s been seen in other jurisdictions.”

The personal incentive program will be available to all Albertans who receive their first or second shot between Sept. 3 and Oct. 14 in the form of one pre-filled debit card. Online registration will open Sept. 13.