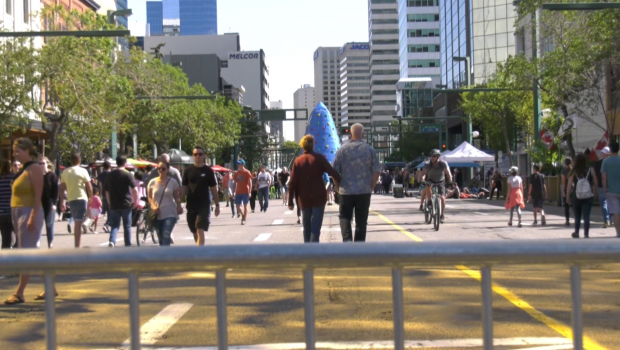 EDMONTON — ‘Open Streets’ is returning to the city and is planned to take place Sep. 18 on 104 Street between Jasper and 102 Avenues.

The popular downtown event will be held during the last Al Fresco on 4th farmers market and is planned to include bike parades, walking tours, design work shops, and street games.

Open Streets is put on by Paths for People, a local non-profit that works to make Edmonton’s infrastructure more accessible to those who walk and bike in the city.

In collaboration with the Edmonton Downtown Community league, Wild Heart collective, and 4thStreet Promenade, the local-non profit decided to hold a scaled back version of its’ 2019 festival.

“We’re running a taste of Open Street which is basically a smaller version of our 2019 Open Streets event,” explained Stephen Raitz, chair of Paths for People.

Raitz says the event introduced many Edmontonians to local businesses.

“We surveyed many people who participated and found out that more than 90 per cent of them got connected with a local business that they had not known about before.”

The event was cancelled last year due to the pandemic, but organizers say this year’s festival will allow for people to be a safe distance from each other.

“I think Edmontonians recognize that we’re always trying to find ways to make our city more vibrant, more livable, (with) more things to do, and this a really great way to re-imagine space that just typically gets used as a thoroughfare for cars, and turn it into a big public park almost,” said Raitz.