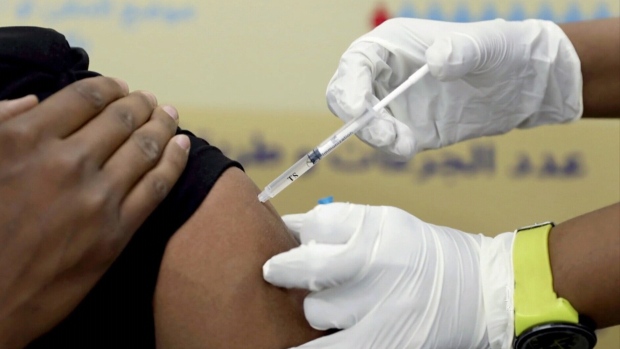 CALGARY — Premier Jason Kenney announced Friday that all people who were not vaccinated or fully vaccinated and receive their first and second shots over the next six weeks will be rewarded with a $100 gift card.

Staff at Renfrew say they have had fewer calls about vaccines this weekend, while Pharm Drugstore says there has been an uptick, but for third doses.

According to provincial numbers, of those aged 12-39, only 58.6 per cent have been fully vaccinated.

“I think this measure was targeted at that age group where $100 might make a difference and might be enough of an incentive for them to get out and get vaccinated,” said Lori Williams, Mount Royal University political scientist.

Kenney said the vaccine incentive is not a bribe, but a way to help push those who are not vaccinated to do their part to support the community.

“If you’ve been holding out and you just haven’t gotten around to it, it’s now literally worth your while,” said Kenney on Friday.

But the gamble may be a pricey one for the premier according to Williams.

“The premier seems to have prioritized the freedom and the rights of that small minority that has refused to be vaccinated, doesn’t want to have masks and yet wants to have full access to society,” she said.

Kenney is hopeful this will spike vaccine numbers by five percentage points, for a cost of $20 million.