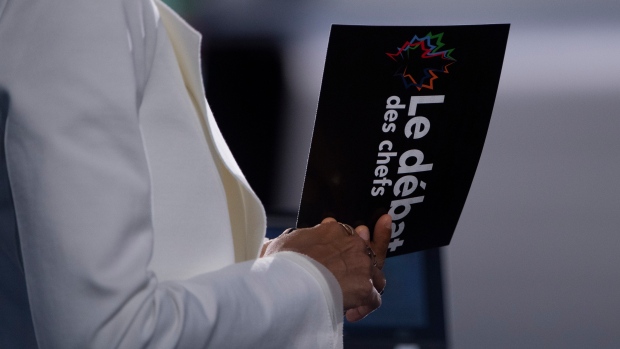 The party leaders will also be participating in the official English debate on Thursday. People’s Party of Canada Leader Maxime Bernier did not meet the criteria established by the independent leaders’ debate commission for participation.

The debates come as polls suggest the Liberals and Conservatives are stuck in a tight two-way race, raising the stakes of what the leaders promise to Canadians during these debates.

Here are some of the main takeaways from Wednesday’s French-language debate:

DEBATE ON A PANDEMIC ELECTION

Why is there an election? That remains a contentious issue among party leaders.

Amid questions about why Canadians need to head to the polls, several of the party leaders highlighted the importance of continuing to work together during the pandemic after the election is decided.

Moderator Patrice Roy asked the leaders if they can promise they won’t call an election for the next four years if they get elected with a minority government.

Trudeau dodged the question, repeating his rationale for triggering an election by arguing the government needs a clear mandate to make decisions on pulling the country out of the pandemic.

O’Toole said he would “yes absolutely” commit to not calling another election in a minority scenario. He highlighted, as did Paul, that collaboration between parties is necessary for the country’s economic recovery.

“An election is a symptom or a consequence of the fact that people are not looking to work together and they’re working in a partisan manner,” Paul said in French.

Singh said in French that it was the “wrong thing” to trigger an election amid the COVID-19 pandemic, but would respect the mandate given by Canadians to the government they elect, while Blanchet said it won’t be his decision.

Blanchet added that his party would support any government measures that are good for Quebec.

GETTING TO KNOW ANNAMIE PAUL

As the new leader of the Green Party, Paul recognized that Canadians may not know as much about her as the other leaders, and took the opportunity of being on the debate stage to reiterate her party’s promises while also offering personal anecdotes.

When discussing the issue of seniors being neglected in long-term care homes, Paul shared that her father died in a care facility during the second wave of the COVID-19 pandemic.

All leaders promised national standards for long-term care homes during the debate in addition to better financing.

When discussing climate change, Paul highlighted that she is the sister of someone who works in the oil and gas industry in Alberta. Because of this, Paul said she understands that those workers need to be kept top of mind with the party’s promise to move Canada to fully renewable energy sources by 2030.

When asked about the relevance of her party, Paul said the Greens platform is practical and realistic, but ambitious.

When pressed on why her party hasn’t released a costed plan, with only two weeks left in the campaign, Paul answered calmly without faltering in her response.

The party leader said a costed platform is “coming,” but wouldn’t specify when. She added that the short campaign of a snap election has contributed to the delay.

The issue of parental supports brought out a heated back-and-forth between Trudeau and O’Toole with both leaders claiming the others’ promises aren’t what Canadians want.

The Liberals, like that of the NDP, have promised to introduce $10 a day daycare within five years, while the Conservatives are promising a refundable tax credit to cover up to 75 per cent of the cost of child care.

However, recent polling from Nanos Research found that Canadians are more likely to prefer subsidized child-care spaces (50 per cent) than a tax deduction on child-care expenses (40 per cent).

Because the province of Quebec already has its own subsidized child-care program, the Bloc Quebecois has not advocated for a national plan. Blanchet said during the debate that this is an example of how a province-made program can be successful

While Trudeau and O’Toole continued to go back-and-forth on the topic during the debate, Paul interrupted to say that the issue of affordable daycare is one that affects women the most, highlighting that she is the only party leader who can understand that with being female.

In what might be considered the most heated moment of the debate, Trudeau and Blanchet get into an argument during the Indigenous rights portion of the debate.

Blanchet asked Trudeau why, if he doesn’t want to impose things on Indigenous people, he feels he can do so with the people of Quebec.

With files from CTV News.ca Writer Ben Cousins and The Canadian Press