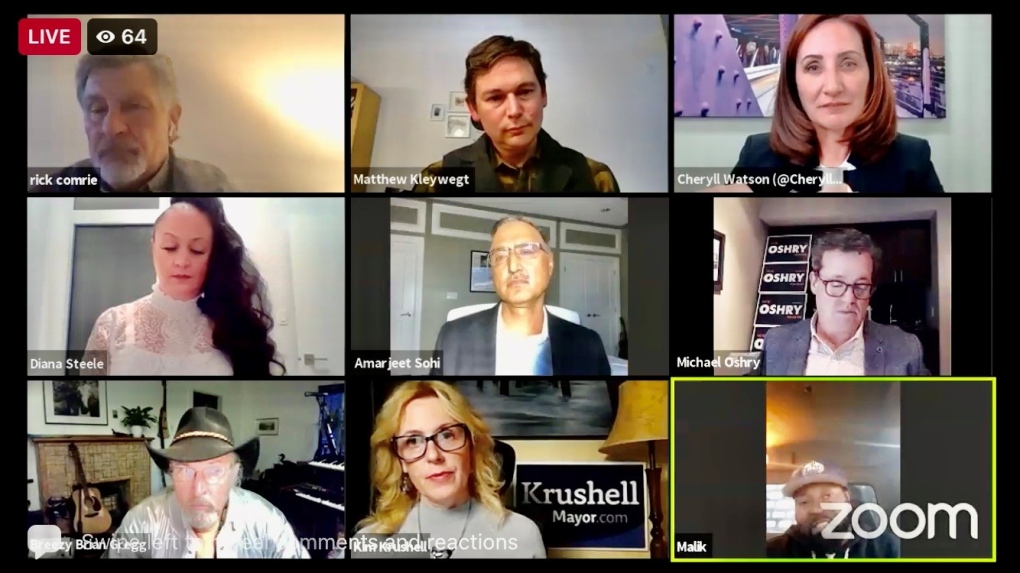 Eight people running to become the next mayor of Edmonton met for a virtual forum Monday night – including four candidates who weren’t invited to other recent debates.

Gregg – known for playing his electric guitar on city sidewalks – said he wants to become the “first rock and roll mayor of Edmonton.”

“I joke around and I like to have fun, but I am really serious and I do want to make our city much better than it is now,” he said.

“I think we should run government like a rock and roll band. Like, taking care of business is super important, but most important is that we all have fun, everyone is having a good time, ok?”

Gregg pointed out that he’s the oldest candidate, he lives in a “little shack” in Rossdale and that his band once opened up for Led Zeppelin in 1969.

Diana Steele – president of the Crestwood Community League – spoke about her vast experience volunteering in Edmonton.

“This is where I discovered my love for servant leadership. Servant leaders, are the types of leaders we should be looking for in all politicians. Those who listen, understand and empathize with others,” she said.

Steele added she often buys Diet Coke and McDonald’s for people in need around Crestwood.

Rick Comrie – owner of a local automotive business – repeatedly took shots at fellow candidate Amarjeet Sohi for his time as a Liberal member of parliament.

“I oppose Justin Trudeau’s vision. Today, in this meeting we have a minister of natural resources who did not work in Alberta’s best interest. And economic hardship perpetuates suicide, substance, homelessness.”

Comrie wants an independent audit of city finances, because he doesn’t trust he budget figures Edmontonians are provided.

“Seems to me we’ve lost our fiscal compass. We don’t where we are financially…Justin has no idea where he is either, and he doesn’t care,” Comrie alleged during a question about locating social services.

Sohi did not respond to Comrie’s comments.

Abdul Malik Chukwudi – a dual-US Canadian citizen – spoke about his Cree and Black roots and his time in the military.

“My dad was a draft dodger and he was supposed to go to Vietnam, and he didn’t think it was a justified war and he came to Canada,” Chukwudi said.

“I served in the military, (Royal) Canadian Air Force as a helicopter pilot in Afghanistan for three years, and in Bosnia for another three years.”

Chukwudi said he would focus on jobs and skills training for men as a way to fight drug dealing and crime in Edmonton.

He disappeared from the forum after not responding to the moderator several times.

Oshry, Krushell and Sohi are all former city councillors. Watson is a local business leader.

Candidate Mike Nickel did not attend, and he declined two other recent forums as well.

Nickel has said he will attend at least two future forums, and has publicly challenged Sohi and Krushell to a televised debate, which is not currently scheduled.

Augustine Marah is also running for mayor but did not attend.

Edmontonians will vote on Oct. 18.