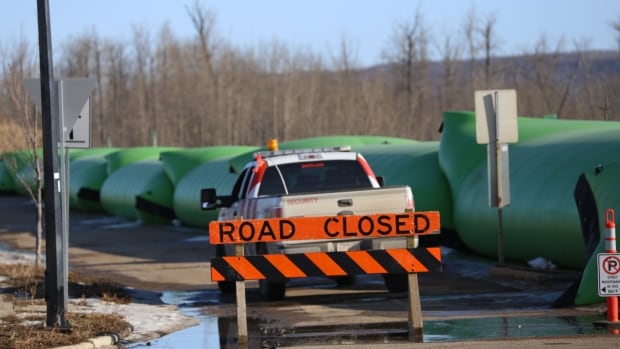 Fort McMurray is more prepared for a flood than ever before, says a top official with the Regional Municipality of Wood Buffalo.

All work on permanent flood mitigation is expected to be completed by 2023, Matthew Hough, the municipality’s deputy chief administrative officer, told council Tuesday.

“We are a more resilient community,” Hough said, adding that he was struck by how much was accomplished this year.

“We became the most protected and prepared we have ever been.”

In April 2020, a 25-kilometre long ice jam formed in the Athabasca River, flooding Fort McMurray’s downtown and forcing the evacuation of 13,000 people.

The municipality has since spent about $11.4 million on temporary mitigation measures.

The municipality is currently building permanent flood mitigation infrastructure across Fort McMurray’s flood-prone areas, including downtown and the neighbourhoods of Waterways, Ptarmigan Court and Taiga Nova.

By the end of construction, the municipality is expected to have spent $257 million on permanent flood mitigation measures.

Hough said other accomplishments to date include modifications to the water treatment plant, the development of emergency exercises, and insurance advocacy.

This year, the municipality relied on temporary measures, such as sandbags and clay berms, to protect the community during spring break-up of the river ice.

As the permanent mitigation is put in place, the temporary measures will be scaled back, Semple said.

“The municipality is improving plans based on the lessons learned from preparedness planning in 2021,” he said.

Coun. Jeff Peddle said while he appreciated all the effort that went into the temporary flood mitigation this year, he didn’t want to see Clearwater Drive closed again. That road was temporarily closed as part of a new berm system.

But Hough said it’s necessary. “It’s highly unlikely that we can establish that temporary mitigation without closing a section of Clearwater Drive again,” he said.

Hough said the road was closed for a “short, modest time to protect the community compared to the losses of the year before.”

He said all flood-prone areas are now fully protected except for Draper, a community of about 200 people 12 kilometres south of Fort McMurray.

Coun. Sheila Lalonde questioned the exclusion of Draper, which was hard hit by the historic flood in 2020.

“We cannot sacrifice one community for the others.”

Hough said each property is being assessed individually, as it’s not feasible to protect that area with a berm.

There will be more information for Draper residents in the coming months, Hough said.

He bought his home in 2019, and isn’t expecting to get any financial assistance for his home. He said his main floor is above the flood level but his basement isn’t, which includes a legal suite and his furnace.

“It should be any portion of the home that’s below… should be eligible,” said Howse.

He’s now building a berm around his property, using his tractor and putting in a few thousand dollars for materials like clay.

“I can’t wait for the city to help me out,” said Howse.

“To see every other community get help except for Draper is pathetic.”