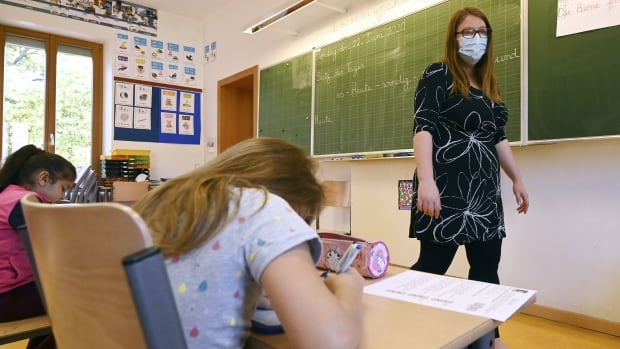 Two schools in rural Alberta are closing their classrooms over the number of students not attending because of COVID-19 infections.

The Big Valley School and Donalda School, both in central Alberta’s Clearview Public Schools, announced Monday that too many students are away from school to continue in-person classes.

“At the time of writing this letter, the percentage of students away continues to be over 10 per cent with reported cases of COVID-19,” the school authority said in a release.

The schools have closed their classrooms to in-person learning for students in Grades 1 through 9 starting Monday until Oct. 1. Kindergarten and playschool classes will continue to be held.

“Instruction and learning opportunities will be offered using a combination of online and paper-based materials,” the release says.

“Classroom teachers will provide a detailed schedule so that students will have direct access to them at specified times during the day.”

The announcement came on the first day of the Alberta government’s new proof-of-vaccination program that allows some businesses and public facilities to operate without capacity limits and other public health measures.

The program was implemented in a bid to clamp down on Alberta’s surging fourth wave of COVID-19.

Businesses that don’t require proof of vaccination will also be subject to capacity limits. Those limits won’t apply to schools.

“We know that hundreds of cases of this deadly virus have been reported among students attending schools across Alberta,” she said in a release.

“We’re beginning to see some schools closed and students forced to learn at home yet again.”

An Alberta Education spokesperson was not immediately available for comment.

Alberta’s devastating fourth wave of the pandemic hit 20,614 active cases on Monday — more than twice as many as any other province or territory and the first time the numbers have surpassed 20,000 in the province since mid-May.

The province is leading the country by a wide margin in daily new COVID-19 cases and active cases.  As of Monday, there were 954 people being treated in hospital, 216 of whom were in intensive care beds.

Earlier Monday, the province released more details about which businesses and institutions come under its Restriction Exemption plan.

Retail stores, libraries, hotels and post-secondary institutions will not be required to take part in the program, nor will worshippers at a church, employees on a worksite or students on a school trip.

Some restrictions will still apply. Stores must limit shoppers to one-third of normal capacity, for example.

Entertainment facilities from restaurants to nightclubs to art galleries are all eligible to participate in the program, allowing them to operate normally as long as they require patrons to show proof of vaccination.

Eligible facilities that choose not to participate must work under public health rules that include capacity limits and mask requirements for indoor public spaces.

Premier Jason Kenney announced the program last week. Retail stores and libraries were initially on the list of eligible organizations but were removed on the weekend.

Kenney had previously opposed a vaccine passport over what he said were privacy concerns. He switched to support for passports as Alberta’s hospitals faced the prospect of being overwhelmed in the pandemic’s fourth wave.

Starting Sunday, immunized Albertans could download proof-of-vaccination cards, but some pointed out they were easily altered. A health ministry spokeswoman said work continues on a more secure QR code that would be available in the coming weeks.