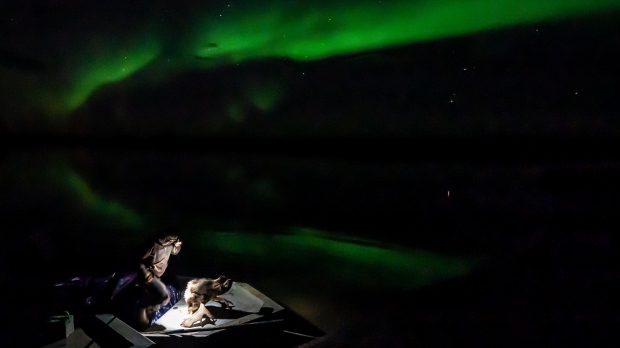 STEVENS VILLAGE, ALASKA — In a normal year, the smokehouses and drying racks that Alaska Natives use to prepare salmon to tide them through the winter would be heavy with fish meat, the fruits of a summer spent fishing on the Yukon River like generations before them.

This year, there are no fish. For the first time in memory, both king and chum salmon have dwindled to almost nothing and the state has banned salmon fishing on the Yukon, even the subsistence harvests that Alaska Natives rely on to fill their freezers and pantries for winter. The remote communities that dot the river and live off its bounty — far from road systems and easy, affordable shopping — are desperate and doubling down on moose and caribou hunts in the waning days of fall.

“Nobody has fish in their freezer right now. Nobody,” said Giovanna Stevens, 38, a member of the Stevens Village tribe who grew up harvesting salmon at her family’s fish camp. “We have to fill that void quickly before winter gets here.”

Opinions on what led to the catastrophe vary, but those studying it generally agree human-caused climate change is playing a role as the river and the Bering Sea warm, altering the food chain in ways that aren’t yet fully understood. Many believe commercial trawling operations that scoop up wild salmon along with their intended catch, as well as competition from hatchery-raised salmon in the ocean, have compounded global warming’s effects on one of North America’s longest rivers.

The assumption that salmon that aren’t fished make it back to their native river to lay eggs may no longer hold up because of changes in both the ocean and river environments, said Stephanie Quinn-Davidson, who has worked on Yukon River salmon issues for a decade and is the Alaska Venture Fund’s program director for fisheries and communities.

King, or chinook, salmon have been in decline for more than a decade, but chum salmon were more plentiful until last year. This year, summer chum numbers plummeted and numbers of fall chum — which travel farther upriver — are dangerously low.

“Everyone wants to know, `What is the one smoking gun? What is the one thing we can point to and stop?”‘ she said of the collapse. “People are reluctant to point to climate change because there isn’t a clear solution … but it’s probably the biggest factor here.”

Many Alaska Native communities are outraged they are paying the price for generations of practices beyond their control that have caused climate change — and many feel state and federal authorities aren’t doing enough to bring Indigenous voices to the table. The scarcity has made raw strong emotions about who should have the right to fish in a state that supplies the world with salmon, and underscores the powerlessness many Alaska Natives feel as traditional resources dwindle.

The nearly 3,200-kilometre-long Yukon River starts in British Columbia and drains an area larger than Texas in both Canada and Alaska as it cuts through the lands of Athabascan, Yup’ik and other tribes.

The crisis is affecting both subsistence fishing in far-flung outposts and fish processing operations that employ tribal members in communities along the lower Yukon and its tributaries.

“In the tribal villages, our people are livid. They’re extremely angry that we are getting penalized for what others are doing,” said P.J. Simon, chairman and chief of the Tanana Chiefs Conference, a consortium of 42 tribal villages in the Alaska interior. “As Alaska Natives, we have a right to this resource. We have a right to have a say in how things are drawn up and divvied up.”

More than a half-dozen Alaska Native groups have petitioned for federal aid, and they want the state’s federal delegation to hold a hearing in Alaska on the salmon crisis. The groups also seek federal funding for more collaborative research on effects that ocean changes are having on returning salmon.

Citing the warming ocean, Republican Gov. Mike Dunleavy requested a federal disaster declaration for the salmon fishery this month and has helped coordinate airlifts of about 41,000 kilograms of fish to needy villages. The salmon crisis is one of the governor’s top priorities, said Rex Rock Jr., Dunleavy’s advisor for rural affairs and Alaska Native economic development.

That’s done little to appease remote villages that are dependent on salmon to get through winter, when snow paralyzes the landscape and temperatures can dip to -29 C or lower.

Families traditionally spend the summer at fish camps using nets and fish wheels to snag adult salmon as they migrate inland from the ocean to the place where they hatched so they can spawn. The salmon is prepared for storage a variety of ways: dried for jerky, cut into fillets that are frozen, canned in half-pint jars or preserved in wooden barrels with salt.

Without those options, communities are under intense pressure to find other protein sources. In the Alaska interior, the nearest road system is often dozens of miles away, and it can take hours by boat, snow machine or even airplane to reach a grocery store.

Store-bought food is prohibitively expensive for many: A gallon of milk can cost nearly US$10, and a pound of steak was recently US$34 in Kaltag, an interior village about 528 kilometres from Fairbanks. A surge in COVID-19 cases that has disproportionately hit Alaska Natives has also made many hesitant to venture far from home.

Instead, villages sent out extra hunting parties during the fall moose season and are looking to the upcoming caribou season to meet their needs. Those who can’t hunt themselves rely on others to share their meat.

“We have to watch our people because there will be some who will have no food about midyear,” said Christina Semaken, a 63-year-old grandmother who lives in Kaltag, an Alaska interior town of fewer than 100 people. “We can’t afford to buy that beef or chicken.”

Semaken hopes to fish next year, but whether the salmon will come back remains unknown.

Tribal advocates want more genetic testing on salmon harvested from fishing grounds in Alaska waters to make sure that commercial fisheries aren’t intercepting wild Yukon River salmon. They also want more fish-tracking sonar on the river to ensure an accurate count of the salmon that escape harvest and make it back to the river’s Canadian headwaters.

Yet changes in the ocean itself might ultimately determine the salmon’s fate.

The Bering Sea, where the river meets the ocean, had unprecedented ice loss in recent years, and its water temperatures are rising. Those shifts are throwing off the timing of the plankton bloom and the distribution of small invertebrates that the fish eat, creating potential chaos in the food chain that’s still being studied, said Kate Howard, a fisheries scientist with the Alaska Department of Fish and Game. Researchers have also documented warming temperatures in the river that are unhealthy for salmon, she said.

Because salmon spend time in both rivers and the ocean during their unique life cycle, it’s hard to pin down exactly where these rapid environmental changes are most affecting them — but it’s increasingly clear that overfishing is not the only culprit, Howard said.

“When you dig into all the available data for Yukon River salmon,” she said, “it’s hard to explain it all unless you consider climate change.”

Alaska Natives, meanwhile, are left scrambling to fill a hole in their diet — and in centuries of tradition built around salmon.

On a recent fall day, a small hunting party zoomed along the Yukon River by motorboat, scanning the shoreline for signs of moose. After three days, the group had killed two moose, enough to provide meat for seven families, or about 50 people, for roughly a month in their small community of Stevens Village.

At the end of a long day, they butchered the animals as the Northern Lights blazed a vibrant green across the sky, their headlamps piercing the inky darkness.

The makeshift camp, miles from any road, would normally host several dozen families harvesting salmon, sharing meals and teaching children how to fish. On this day, it was eerily quiet.

“I don’t really think that there is any kind of bell out there that you can ring loud enough to try to explain that type of connection,” said Ben Stevens, whose ancestors founded Stevens Village. “Salmon, to us, is life. Where can you go beyond that?”