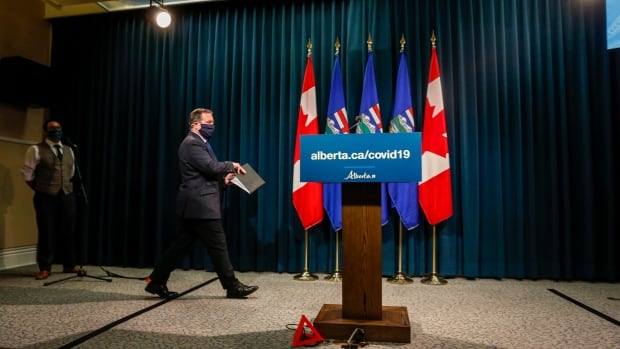 New COVID-19 modelling shows Alberta may have finally reached its pandemic peak and, if the province leaves restrictions in place and continues to increase vaccination rates, infections and hospitalizations will continue to decline.

“It looks from my point of view that, in fact, the peak has been reached and Alberta is on the other side,” said Dean Karlen, a University of Victoria physics professor and member of British Columbia’s independent COVID-19 Modelling Group.

Karlen said he looked at hospitalization rates, rather than infection rates, because Alberta eliminated most contact tracing at the beginning of August.

The hospitalization data clearly shows a direct link to restrictions reimposed by Premier Jason Kenney when he again declared a state of public health emergency on Sept. 15.

“We see that in the last 10 days, a dramatic turnaround in the number of people being admitted to hospital,” Karlen said

“So when we use the model to identify the date that this transition in transmission occurred, then the model finds that Sept. 15 is the best fit to that data.”

Another week needed to be sure

Kenney declared a state of emergency and brought back restrictions when the province’s health-care system was on the verge of being overwhelmed as infection rates and hospitalizations skyrocketed.

The Alberta government also introduced a proof of vaccination program — a move the premier had resisted, despite calls from doctors and others who said it was critical to help halt the spread of infection.

As of Wednesday, the number of active cases had dropped back to 18,912 — almost where it was when the government declared the state of emergency. Hospitalizations, which lag behind case numbers, were still high at 1,083.

Karlen cautioned however that another week of data must be analyzed to be certain that infections and hospitalizations will continue to decline, and how fast or slow that decline will be in the future.

He further cautioned that the Kenney government must maintain the new restrictions so that demands on the health-care system can be brought to manageable levels.

The public must also continue to follow pandemic protocols, particularly as the cold weather forces more social events indoors, including Thanksgiving gatherings this weekend, he said.

On Tuesday, the Alberta government announced it again would start contact tracing within schools, which Karlen said will also help to reduce the spread of infection.

An Alberta Health spokesperson declined to comment on the modelling.

Using hospital admissions as the modelling data is reasonable and valid, according to Dr. Lynora Saxinger, a University of Alberta infectious diseases expert.

“There is some hope on the horizon,” she said.

However, like Karlen, she stressed that the continued decline in infections and hospitalizations is dependent on the government not lifting restrictions prematurely.

The road out of the pandemic is going to be slow, Saxinger added.

“When you think you have reached a peak, it is important not to forget that on the other side of the peak is the long climb down,” she said.

She said people will continue to get sick and end up in intensive care. As well, it will be months before the health-care system can begin addressing the backlog of postponed surgeries and other urgent procedures

“Keeping the brakes on really hard and trying to get the fastest drop possible (in infections and hospitalizations) will make a really big difference to the health-care system and everyone who’s been waiting for care,” she said.