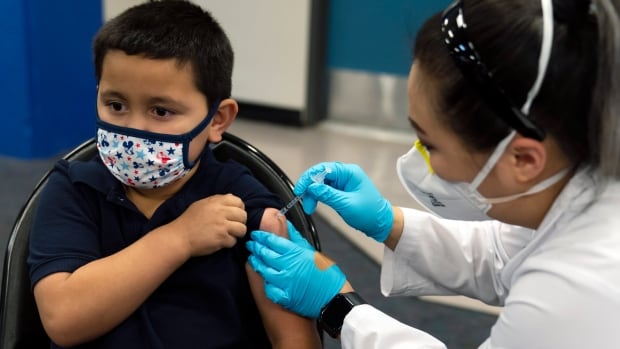 A glitch on the Alberta Health vaccination booking site has left parents scrambling to cancel and rebook pediatric COVID-19 vaccine appointments made in error.

Starting Wednesday at 8 a.m., Alberta parents and guardians were able to book appointments for children between ages five and 11, for the first time.

But the morning rush to land appointments did not go smoothly for many.

Brent Oliver made an appointment at a pharmacy in north Edmonton for his 10-year-old daughter, only to find out the site would not have any pediatric shots to administer.

“I think I’ve probably gotten pretty used to frustration in the last year when it comes to vaccines, so this is just another one,” Oliver said.

“I just worry about all the parents that show up at these vaccination appointments and their kids aren’t booked. And then by the time they get back onto the … system, it’s weeks until they can actually book.

“Why can’t they just get this right? They’ve had so many chances.”

Alberta Health confirmed that four pharmacies without access to the pediatric vaccine were incorrectly listed on the booking site for children.

Spokesperson Michael Francoeur could not say how many appointments were made in error but said more detailed numbers would be available later Wednesday.

“We are aware of four pharmacies that incorrectly opened pediatric vaccine appointments early this morning,” Alberta Health said in a statement to CBC News.

“These sites have been contacted and they are in the process of cancelling these appointments.”

Staff at Balwin Pharmacy in north Edmonton confirm that at least 150 appointments for the pediatric formula of Pfizer-BioNTech’s COVID-19 vaccine were made in error.

After the business opened Wednesday morning, staff were calling parents to advise them to get their children vaccinated elsewhere.

The pediatric vaccines are being delivered to 120 vaccination clinics across the province.

Pharmacies in only four communities —  Alix, Legal, Clive and Warburg — will have access to the pediatric vaccine.

Vaccine appointments can be made online here. Alberta Health Services said the first shots of the pediatric vaccine will be administered Friday.

‘A lot of confusion’

Mackey said the group has been inundated with complaints from parents who eagerly booked appointments for their children, only to learn they were made in error.

“It’s been an action-packed morning,” she said. “You want to book, you want to grab what’s available.”

Mackey said volunteers noticed the error on the Alberta Health booking website early Wednesday and posted a warning to parents on Twitter but many were still caught up in the confusion.

“That’s pretty stressful to think about. All these parents were going about their day thinking they got an appointment booked … and goodness knows what’s going to happen when they get there.”

Mackey encouraged parents to cancel their kids’ pharmacy appointments and rebook with a vaccination clinic.

“We’re a little concerned that people are going to be showing up at these pharmacies expecting doses,” she said. “There is a lot of confusion around this.”

There were other hiccups with Wednesday’s launch. Appointments were temporarily unavailable in Lethbridge.

Alberta Health said the issues in Lethbridge were resolved around 9 a.m.

Mackey said she was able to book her daughter’s appointment later this week. While many parents were left frustrated, she said it was good to see so much excitement around the rollout.

“We are seeing lots of very enthusiastic parents who got their kids booked this morning.”