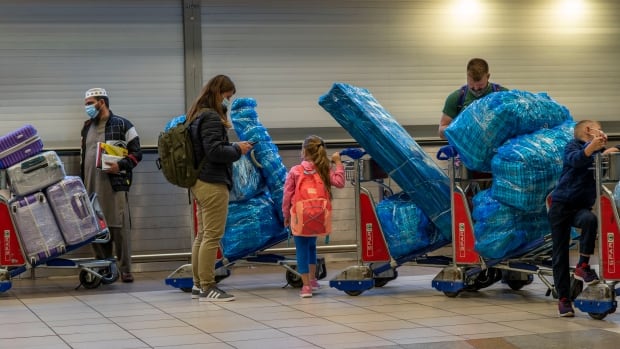 Conservative Leader Erin O’Toole is urging the federal government to ban all non-essential travel to and from southern Africa to stop a new — and possibly more infectious — COVID-19 variant from taking hold in Canada.

Countries around the world already have restricted travel from some areas of the African continent in an effort to keep the newly identified coronavirus variant from crossing their borders.

While many questions remain about how transmissible or virulent this new variant is, the U.K. Health Security Agency warned Friday that the new strain found in southern Africa is the “most complex” and the “most worrying we’ve seen.”

Britain, Israel and Singapore, among others, have restricted travel from South Africa and some neighbouring countries. European Commission President Ursula von der Leyen is proposing member states pull the “emergency brake” on travel from some countries in Africa to limit the spread of the variant.

“With reports of the spread of a new COVID-19 variant, we have a small window of opportunity to act and we must move now. Canada’s Conservatives are calling on Justin Trudeau to secure Canada’s borders,” O’Toole said in a media statement.

O’Toole is proposing a ban on all non-essential travel from South Africa, Namibia, Zimbabwe, Botswana, Lesotho and Eswatini and mandatory quarantines for all travellers from the affected countries, regardless of their vaccination status.

“Lessons learned from earlier in the pandemic need to inform our actions today. Temporary measures to immediately secure our borders will keep Canadians safe and protect our economy,” O’Toole said.

The <a href=”https://twitter.com/EU_Commission?ref_src=twsrc%5Etfw”>@EU_Commission</a> will propose, in close coordination with Member States, to activate the emergency brake to stop air travel from the southern African region due to the variant of concern B.1.1.529.

In question period Friday, Conservative MP Luc Berthold, the party’s health critic, called for swift action to prevent the new variant from derailing Canada’s progress in the fight against COVID-19.

“Canadians are worried,” Berthold said. “The Liberal government has been slow, slow to warn Canadians, slow to close the borders, slow to provide vaccines. There’s still time to protect Canadians who are fed up with lockdowns.”

Associate Health Minister Carolyn Bennett said pre-departure PCR testing is still in place and those tests “are capable of detecting this variant.”

“The COVID-19 situation around the world continues to be volatile and unpredictable and we continue to monitor the situation very closely,” she said.

Transport Minister Omar Alghabra said the government won’t take lessons from the Conservatives on pandemic management when O’Toole himself refuses to require that all Conservative MPs get a COVID-19 vaccine.

“Forgive me for not taking advice from the Conservative Party,” he said.

Anthony Fauci, the top U.S. infectious-disease official, said banning flights to the United States from southern Africa is a “possibility” but that a decision has not been made yet.

“There is always the possibility of doing what the U.K. has done, namely block travel from South Africa and related countries,” Fauci said Friday morning in an interview on CNN.

“That’s certainly something you think about and get prepared to do … But you want to make sure there’s a basis for doing that.”