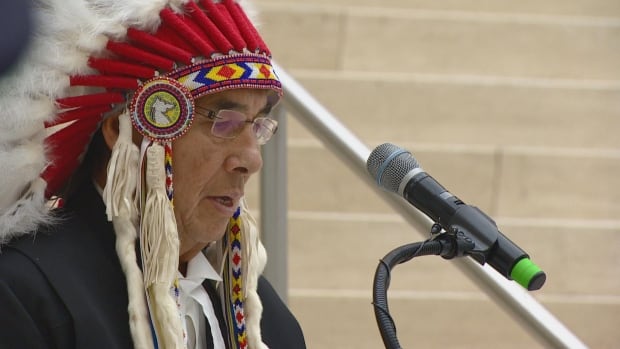 Wilton Littlechild of Ermineskin Cree Nation in Alberta is hoping the head of the Catholic Church will soon apologize for the church’s role in residential schools.

Chief Littlechild, a residential school survivor, is one of 30 Indigenous delegates headed to the Vatican in December for a private meeting with Pope Francis to find ways toward healing and reconciliation with the Catholic Church.

“We heard it many, many, many times from former residential school students or survivors that they would like to hear three words from the Pope as the head of the church,” Littlechild told CBC’s Radio Active on Friday.

The heads of the United, Anglican and Presbyterian churches have all apologized for their churches’ roles in the residential school system.

8:07Visiting the Pope to ask for an apology

A group of Indigenous people from Canada will travel to the Vatican next month. We talk to Chief Wilton Littlechild from Alberta about what he hopes to say to Pope Francis. 8:07

The Vatican delegation includes Inuit, First Nations and Métis elders, knowledge keepers, residential school survivors and youth. The Pope will have private meetings with each community separately for an hour, before hosting an hour-long joint meeting with all three.

“It’s a very, very, apparently rare opportunity and a rare occurrence for a pope to delegate that much time,” said Littlechild, former Grand Chief of the Confederacy of Treaty Six First Nations.

In October, the Vatican announced that Pope Francis will visit Canada “at a date to be determined” to help ongoing efforts at reconciliation with Indigenous people after the discovery of hundreds of potential burial sites at former residential schools during the summer.

Littlechild hopes he can convince the pope that an apology would be a significant step of healing for survivors like him.

“All I want to hear is three words, ‘I am sorry,’ and then I can begin my own healing journey,” he said.

Previous calls for an apology have gone unanswered including a delegation that met with Pope Benedict in 2009.

The Truth and Reconciliation Commission’s final report urged the Pope to issue an apology “for the Roman Catholic Church’s role in the spiritual, cultural, emotional, physical, and sexual abuse of First Nations, Inuit, and Métis children in Catholic-run residential schools.”

Littlechild said it is “critically important” for the Pope to make the apology in Canada, within its territories.

“Because that was the call to action that we made. And this is a very significant, important first step to this journey that we’re about to take,” he said.

The Indian Residential Schools Resolution Health Support Program has a hotline to help residential school survivors and their relatives suffering trauma invoked by the recall of past abuse. The number is 1-866-925-4419.