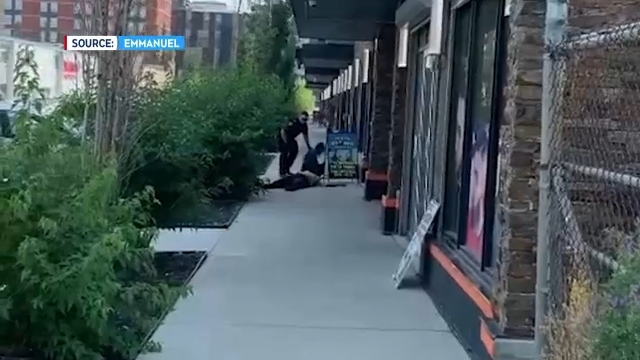 A man has pleaded guilty to several charges after an Edmonton mother was slammed to the ground and strangled in front of a daycare while two of her children looked on in horror.

On Friday, Rocky Rabbit, 30, pleaded guilty in Alberta Provincial Court in Edmonton to aggravated assault and overcoming resistance by choking.

Rabbit is scheduled to be sentenced on Jan. 26. He was in court Friday dressed in an orange prisoner’s jumpsuit, and said ‘yes’ and nodded when asked if he understood his guilty plea.

The victim of his attack, who was unknown to Rabbit at the time of the attack, is expected to attend and deliver a victim impact statement.

Court heard an agreed statement of facts that outlined the July 14 attack.

It reads that the 39-year-old victim was walking along 111 Street near 105 Avenue to collect her three children from Seven Stones Daycare.

It describes how Rabbit tried to pull off a grey backpack she was wearing, asking her, “did you kill my daughter?” and demanded to know where the girl was.

Reading from the statement, Crown prosecutor Mark Fernandes recounted how she tried to pull away from him, but he slammed her to the ground with both hands before mounting her and alternating between strangling her and punching her in the chest and stomach.

Two of her children, aged six and eight years old, “cried hysterically” as they saw the attack through the glass daycare door.

The attack was captured on video by CCTV as well as on a bystander’s cell phone, and lasted about four minutes, Fernandes said, noting “it very nearly caused her death.”

Court heard how when police arrived they found Rabbit on top of the mother, still strangling her. He was arrested and later admitted to police that he had consumed meth before the attack.

The attack left the woman unconscious with a tennis-ball sized hematoma on her head and shallow breathing. Her face had also turned blue and she was foaming at the mouth.

Her husband ran to the scene from their family’s home about a block away and was “distraught,” according to court documents.

Rabbit has been in custody since the attack. Four months before then, he was issued an appearance notice relative to an assault charge in Calgary that was resolved last month.