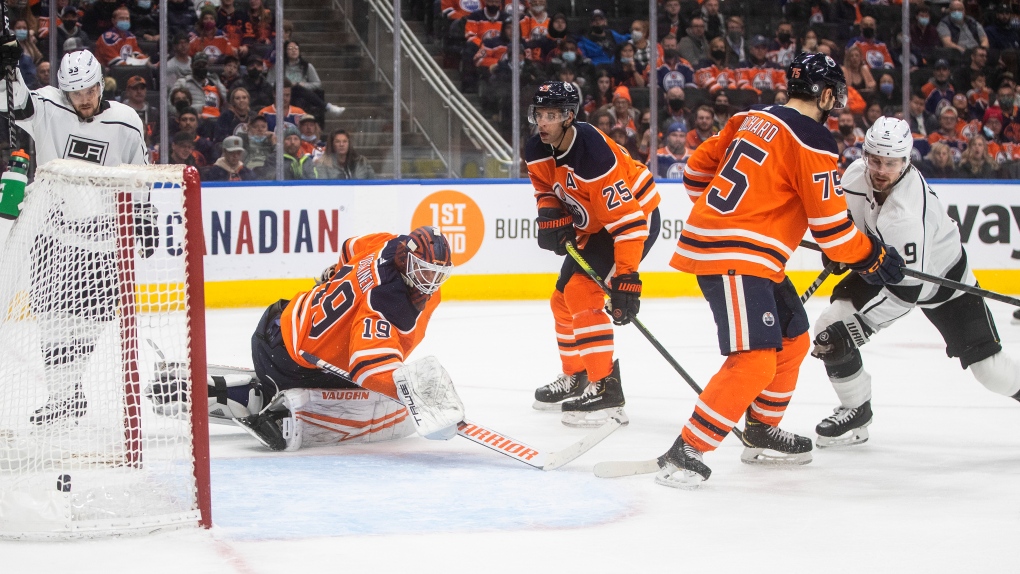 Adrian Kempe scored a pair of goals and the Los Angeles Kings snapped a two-game losing skid by defeating the Edmonton Oilers 5-1 on Sunday.

Darnell Nurse replied for the Oilers (16-7-0), which lost two straight for the first time this season. Mikko Koskinen stopped 35-of-40 shots.

The Oilers got off to another bad start as the Kings scored just two minutes into the contest when Moore made a nice touch pass to Kupari at the side of the net for an easy tap-in past Koskinen.

The Kings made it 2-0 less than two minutes into the middle frame as Kempe scored his ninth on a wrist shot that Koskinen could have saved.

Edmonton got back into the game midway through the second period with a shorthanded goal, as Nurse was able to score up high from a sharp angle past Kings goalie Quick — his first goal of the season.

Nurse returned to action after missing six games for breaking a finger blocking a shot.

The Oilers made any chances of a late comeback very difficult on themselves as Connor McDavid took a five-minute major with 6:33 remaining in the third period on a boarding call after hitting Kempe from behind.

Los Angeles got a power-play goal just over a minute later as Kempe got revenge by scoring his second of the game on a rebound from the doorstep.

The Kings added a second goal on the man advantage as Doughty was able to rifle a shot into a wide-open net.

They then got a third goal in a span of 2:19 on the major penalty power play to McDavid, as Moore was able to find some space in front to beat Koskinen.

The Kings are right back at it on Monday as they head to Vancouver to face the Canucks, while the Oilers play the second game of a six-game homestand on Tuesday against the Minnesota Wild.

This report by The Canadian Press was first published Dec. 5, 2021