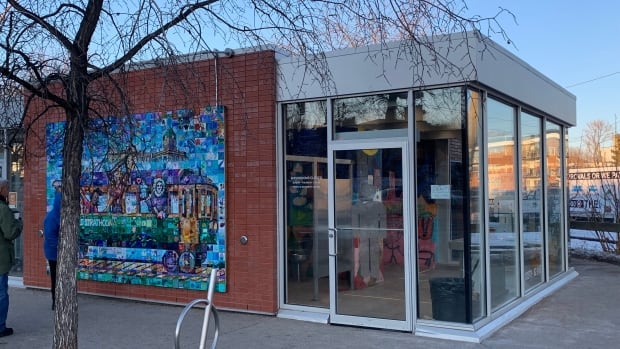 The city placed portable washrooms in several high traffic areas this spring and summer as access to public facilities such as libraries and malls was stymied due to pandemic closures.

In a one-time 2022 COVID-19 impacts and funding strategy approved by council this week, $2.7 million is being set aside for a temporary washroom strategy related to homelessness.

Puneeta McBryan, executive director of the Edmonton Downtown Business Association, acknowledged the need for the temporary washrooms during the pandemic.

But she made a plea to city council during a public hearing on Monday for permanent washrooms for everyone.

“Frankly, I do not understand why we’re still putting porta-potties in public places as a public washroom solution,” McBryan said.

Accessible and clean washrooms are essential for human rights and social equity but also necessary for local businesses to thrive, she said.

“I really feel strongly that we need strong leadership to have permanent structures built within our business districts.”

She asked managers whether the city could build permanent washrooms next year if council dedicated capital funding in the fall supplemental budget.

“I’m really keen and I’m hearing from a lot of stakeholders just about the incredible importance of having permanent washroom facilities as soon as possible,” Stevenson said.

Adam Laughlin, manager of integrated infrastructure services, said it’s possible to start next year, depending on the type of washroom.

A similar facility to the one on Whyte Avenue would take longer and require extensive public engagement but something simpler could be built more quickly, he said.

The city currently operates a few permanent washrooms, including ones at Louise McKinney Park, Churchill Square and Old Strathcona.

Gord Cebryk, manager of city operations, said his team is working on a longer-term washroom strategy that will include a proposed budget.

“That would include identifying all the engagement work that would have to take place in terms of where and what we’re building,” Cebryk said.

City manager Andre Corbould said different parts of the city require different kinds of facilities and that the city needs time to assess those needs.

“We hear a lot from suburban Edmontonians who travel the beautiful trails we have, or river valley users, who just want to go to the bathroom between their long runs or bike rides,” Corbould told council.

Corbould and Cebryk said they plan to consult the public next year and present the proposed permanent washroom strategy to council in the fall.

“I know there’s an urgency to get this done but I would worry that if we rush to that, we won’t build the right thing,” Corbould said.