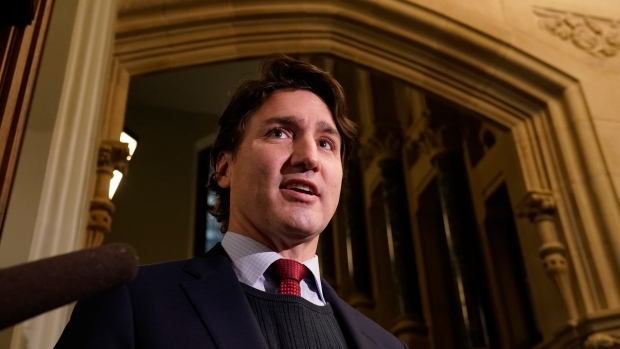 OTTAWA — Canada will proceed with a diplomatic boycott of the 2022 Beijing Winter Olympic Games, meaning government officials won’t attend but athletes can continue to compete.

This is a breaking news update…an older version of the story follows.

Prime Minister Justin Trudeau says there will be an announcement later today on the government’s decision about whether to proceed with a diplomatic boycott of the 2022 Beijing Olympic Games.

Speaking to reporters on his way into a caucus meeting on Wednesday, Trudeau said it’s important to align with allies – many of whom have chosen not to send government officials to the Games, but allow athletes to continue to compete.

“For the past many, many months we’ve been talking about our approach with allies around the world. We know that on issues like this it’s important to make sure that we are working with our allies…we will have an announcement to make later today,” he said.

The U.S. announced a diplomatic boycott on Monday as a means of protesting against human rights abuses in China towards the Uyghur Muslims in the Xinjiang province.

White House press secretary Jen Psaki told reporters that the U.S. has a “fundamental commitment to promoting human rights” and that it “will not be contributing to the fanfare of the Games.”

Since then, Australia and the U.K. have followed suit.

China has denied those allegations and says the boycott violates “the principle of political neutrality of sports established by the Olympic Charter and runs counter to the Olympic motto `more united,”‘ Foreign Ministry spokesperson Zhao Lijian told reporters.

Many former diplomats and international security analysts suggest Canada should go further and enforce a full boycott, withdrawing all Canadian presence, including athletes.

Foreign Affairs Minister Melanie Joly also commented on the issue on Wednesday, noting that Canada is acting in a “diligent” manner.

“The most important thing for Canada right now is to make sure that we can have a strong voice on the question of human rights in Xinjiang in China,” she said.

With a file from The Associated Press.