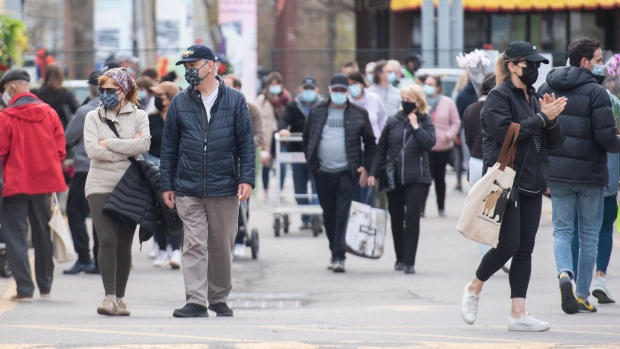 The Global Health Security (GHS) Index painted a grim picture in its 2021 report on the world’s preparedness for the next pandemic, with not a single country scoring in its top tier.

The GHS Index measures preparedness for health emergencies and issues, and is compiled by the Nuclear Threat Initiative and the Johns Hopkins Center for Health Security at the Bloomberg School of Public Health.

Canada scored fourth out of 195 countries, behind the U.S., Australia and Finland, with an overall rank of 69.8 on the index score, up 2.2 points from 2019, the GHS Index shows.

The Index is broken down into several categories that are scored individually to mark preparedness: Prevent, Detect, Respond, Health, Norms, Risk and Overall.

Here is a brief breakdown on how Canada scored.

The worst area overall for preparedness in the GHS Index was preventing the emergence of new pathogens, such as the SARS-CoV-2 virus that caused the current pandemic.

“The global average for the prevention of the emergence or release of pathogens is 28.4 out of 100, making it the lowest-scoring category within the GHS Index,” the report said, adding that more than 100 countries “show little to no attention” to diseases transmitted from animals to humans.

Zoonotic disease was a category in which Canada took a dip in the GHS Index, down from its 2019 score and ranking the country 39th out of 195.

In its Country Score Justification Summary, the Index says of Canada; “there is insufficient evidence that Canada has national plans and strategy documents which include measures for risk identification and reduction for zoonotic disease spillover events from animals to humans. There are several plans on wildlife and animal surveillance related to zoonotic diseases that describe how Canada will address such risks, but there is no plan, guidance, or law mandating the risk assessments themselves.”

However, Canada went up four points in the “biosecurity” section of the Prevent category to 86.7, ranking Canada third out of 195 countries.

The Justification Summary, the document that gives context to each country’s score and rank in the GHS Index, states that “Canada has legislation and regulations related to biosecurity which address requirements such as physical containment, operation practices, failure reporting systems and cybersecurity of facilities in which especially dangerous pathogens and toxins are stored or processed.”

Canada ranked number one in the “biosafety” section with 100 points, the same as the 2019 assessment.

Canada retained most of its scores in the “detect” category from 2019 in sections like “laboratory supply chains,” and “real time surveillance and reporting.”

In the Justification Summary, the GHS Index notes while “there is no evidence that Canada has a standalone national system in place to provide support at the sub-national level to conduct contact tracing,” there is evidence the Canada provides medical attention to enable infected people and their contacts to self-isolate or quarantine as recommended.

“Economic support varies by jurisdiction and employment sector, and the evidence seems to be Covid-19 specific,” the summary states, adding there is an agreement between the public health system and border control authorities, which added to the score given.

Canada experienced both highs and lows in this category, retaining its same score from 2019 in the category of “emergency preparedness and response planning,” and ranking 19th out of 195.

In the “exercising response plans,” Canada scored 25 points higher than in 2019, with the Justification Summary noting “Canada activated its national emergency response plan for an infectious disease outbreak in the past year. On January 15, 2020, Canada activated its 2017 Federal/Provincial/Territorial Public Health Response Plan for Biological Events in response to the COVID-19 outbreak, which became a global pandemic.”

However, the Summary also stated “there is insufficient public evidence that Canada has in the past year has undergone an exercise to identify a list of gaps and best practices through either an after action review (post emergency response) or a biological threat-focused IHR(International Health Regulation) exercise with the World Health Organization (WHO).”

Canada also scored higher in the “risk communication” and “access to communications infrastructure” sections, ranking number one and 61 respectively.

In the “trade and travel restrictions” Canada dropped 50 points from the 100 scored in 2019.

In the Justification Summary, the Index notes that “there is no public evidence” that Canada issued a restriction on the export or import of medical goods and non-medical goods (such as food or textiles) due to an infectious disease outbreak including in response to the COVID-19 pandemic.

The Justification Summary also took aim at Canada’s travel ban, in answer to the question “In the past year, has the country implemented a ban, without international/bilateral support, on travellers arriving from a specific country or countries due to an infectious disease outbreak?”

The Summary states that “In March 2020, Canada issued a blanket ban on all foreign nationals from non-essential travel to Canada.”

Canada’s recent travel ban on countries in southern Africa in light of the emergence of the Omicron variant has been decried by organizations like the WHO.

Again Canada retained most of its scores from 2019, with two notable exceptions.

In “health capacity in clinics, hospitals and community care centres,” Canada surged 16.4 points to 49.6, ranking the country 35th out of 195.

The Justification Summary says Canada has 261 doctors, and 994 nurses and midwives per 100,000 people, but “there is no public evidence that Canada has a national health sector workforce strategy in place (which has been updated in the past five years) to identify fields where there is an insufficient workforce and strategies to address these shortcomings.”

Canada dipped slightly in the “healthcare access” category, ranking the country 155th out of 195.

All scores in this section, which includes things like “commitment to sharing of genetic and biological data and specimens,” remained the same from 2019 for Canada, except for “Joint External Evaluation (JEE)” and “Performance of Veterinary Services Pathway (PVS).”

In those two categories, Canada went up 25 points to 50, ranking the country seventh out of 195.

Canada experienced some slight changes to its scores in this category, dipping slightly in the “political and security risk” section to rank ninth out of 195.

However the country scored lower in categories such as vested interests, cronyism, accountability of public officials, organized crime and international disputes.

The Justification Summary stated that Canada was scored 77 out of 100 (where 100 is the best) measured by the Corruption Perception Index by Transparency International.

The country’s scores went up slightly in the “socio-economic resilience” and “environmental risks” section to 95.5, and 64.8 – ranking the country eighth and 38th respectively in those sections.

—
With files from the Canadian Press