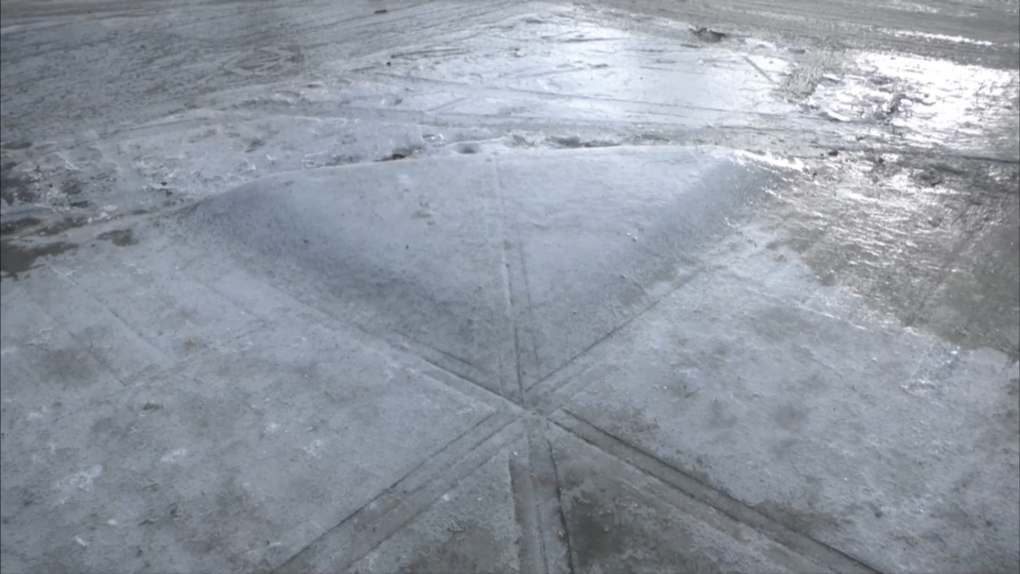 More than 24 hours after sheets of frozen rain covered Edmonton – city crews were still salting, sanding and chipping – leading some to ask what it’ll take to get the job done quicker.

“I do not like freezing rain. This freezing rain is a killer for seniors,” Lynne Taylor told CTV News Edmonton Thursday.

Alberta Health Services said there have been at least 130 ambulance calls for slips and falls in Edmonton since Wednesday.

Taylor fell on the ice two years ago and spent the next seven weeks in the hospital. She’s frustrated by the state of city sidewalks, but has sympathy for the workers too.

“I understand it’s a money problem, and it’s difficult, and they can only do so much. They get the main roads clear and stuff, but the main roads aren’t where I’m going,” she said.

Tim Lajeunesse spent a couple of hours Thursday chipping the ice and scraping his sidewalks clean.

“Take a look at the streets here. Very, very slippery. I would prefer just a little bit colder so we don’t get this freezing rain,” he said.

After working on roads and bike lanes, City of Edmonton said its crews started on pathways and priority walkways Wednesday afternoon.

‘WE HAVE SPREAD OURSELVES TOO THIN’

The goal is to have the main city-owned walks complete by Friday at 4 p.m., but freezing and thawing means crews have to hit some paths several times.

“Our priority is increasing traction for the safety of Edmontonians. Crews are out inspecting and they are applying the appropriate material for the conditions,” said Philip Herritt with the city.

Edmonton uses a priority system for sidewalks, starting at City Hall, rec centres, and seniors centres. The goal is to end in five days with community sandboxes refilled.

But at least one councillor believes the city needs to rethink its plan.

He wants the parks and roads department to have access to an $8 million surplus from this year.

In the meantime, Knack and lots of Edmontonians are hoping the freezing rain is over for this year.