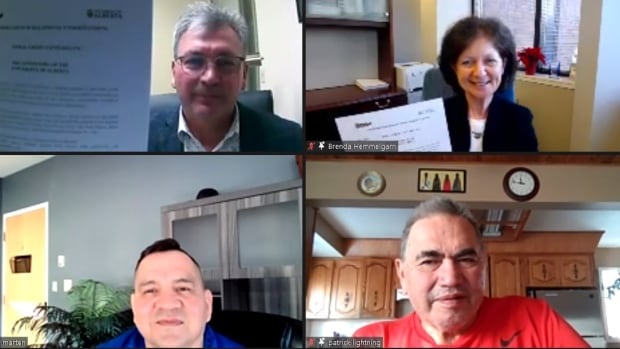 Six First Nations and the University of Alberta are teaming up to train more Indigenous physicians and other medical practitioners.

“By working together we will honour several of the calls to action of the Truth and Reconciliation report,” said university president Bill Flanagan.

“In particular, increasing the number of Indigenous health practitioners, improving cultural sensitivities and anti-racism training for all healthcare workers, recognizing the value of traditional healing practices, and closing the gaps in health outcomes between indigenous and non-Indigenous peoples.”

“I wanted to be a dentist,” he said. “I had to give up a long time ago because I didn’t have the education, the math. I was frustrated.”

Desjarlais said the program will provide more access to others in similar situations.

“The new buffalo for our people is education,” he said. “That’s where we have to push our children to, our grandchildren, and we have to open these doors for them and pave the way.”

“I just want to say thank you again to the U of A because it’s part of the reconciliation that’s happening around the world.”

“I asked them why there’s not more First Nations out there,” he said. “I saw all diversities of the mosaic of Canada. It would be nice to see our own First Nations people in this health-care facility, this work, this field.”

Dr. Brenda Hemmelgarn, dean of the faculty of medicine and dentistry, said the new agreement should help address that.

Hemmelgarn said next steps include building trust and working closely with the communities so they can begin recruiting trainees.

“I am excited about this memorandum of relational understanding and the potential it has to promote learning opportunities in the sciences and medical fields for the youth of the Tribal Chiefs Ventures Inc. member First Nations,” he said.

“There is a need for Indigenous medical practitioners — physicians, psychologists, psychiatrists, nurse practitioners, RNs, dentists and others — to help address the needs of First Nations peoples.”