For a second straight year, the world’s best teenaged male hockey players will gather in Edmonton this holiday season at the World Juniors.

Team Canada is looking to recapture the title after last year’s gold medal game defeat to the Americans.

This year’s Team USA is looking to repeat as World Juniors winners for the first time but will also have to fend off challenges from contenders Sweden, Russia and Finland.

Scroll down or click the links below for a preview of each team as well as a star player to watch.

Team Canada will, as usual, be favourites to win World Juniors gold and will be looking for redemption after steamrolling the opposition until being blanked by the Americans 2-0 in the gold medal game last year.

With just three returning players, the 2022 squad has been overhauled but features Canada’s typical depth of talent at all positions.

It also includes a strong Alberta contingent with seven players hailing from the tournament’s host province, including four members of the Edmonton Oil Kings.

Canada’s toughest group game will be on New Year’s Eve against Finland and the hosts face a potential gold medal game rematch against the USA in the knockout rounds. 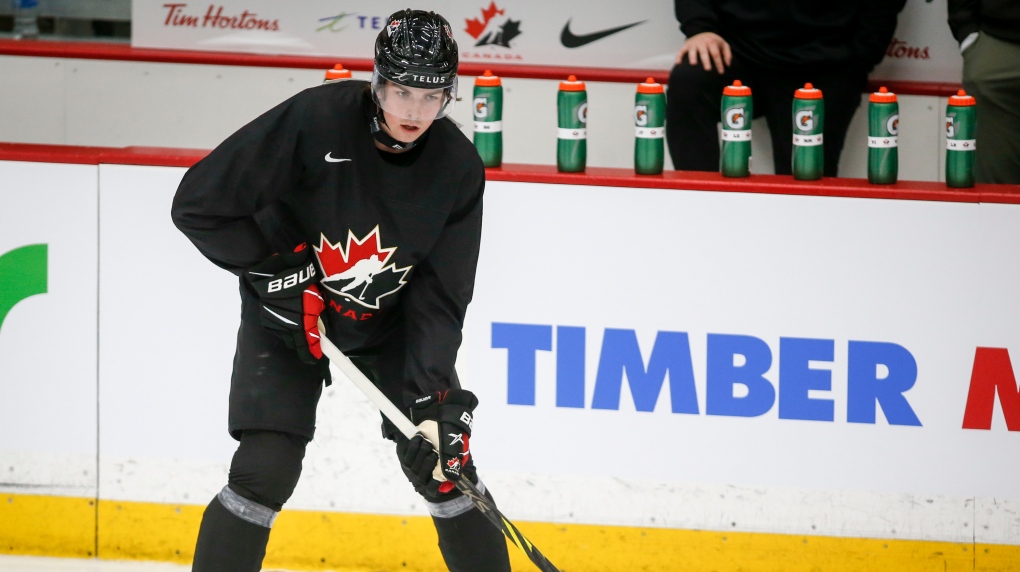 Power, 19, will make his World Juniors debut after being selected first overall by Buffalo in last summer’s NHL draft.

The six-foot-six Power has the skating ability, size and hockey instincts to play in any situation.

Finland has won a medal at three of its last six tournaments and brings back nearly half of its bronze-medal winning team from last year.

Pittsburgh Penguins draft pick Jesper Blomqvist is likely to backstop a workmanlike team that may lack the high-end talent of other contending countries, but has a mix of experience and young talent looking to make names for themselves.

Toronto Maple Leafs prospect Topi Niemela was named best defenceman at last year’s tournament and leads the Finnish league in scoring among all defencemen this year.

Returning forward Kasper Simontaival, Roni Hirvonen and Brad Lambert will be counted on for scoring, as will draft-eligible talent Joakim Kemell. 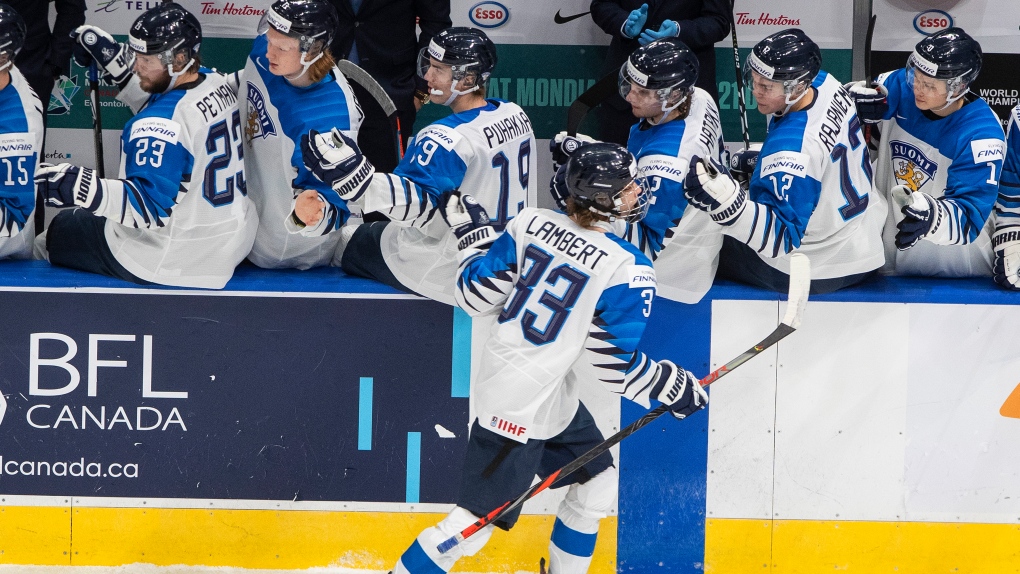 Lambert, 18, was among the youngest players at last year’s World Juniors and is considered to be among the top draft-eligible prospects at this year’s tournament, with scouts citing his strong skating and stickhandling.

Lambert was born in Lathi, Finland and holds dual Canadian-Finnish citizenship through his Canadian father and Finnish mother.

“I was born in Finland and only played in Canada for one year,” he told the IIHF in 2019. “It seemed like a natural choice.”

The forward represented his country twice last year, recording four points in seven World Juniors games as part of a bronze-medal winning team, while also racking up five points in as many games at the under-18 level.

COVID-19 devastated what proved to be an underrated German team last year. Nine players tested positive in the days before the tournament, leaving the team with just 14 skaters for its first three games.

Despite that, the team rallied to win its last two group games and progress to the quarterfinals for the first time in the country’s World Juniors history. 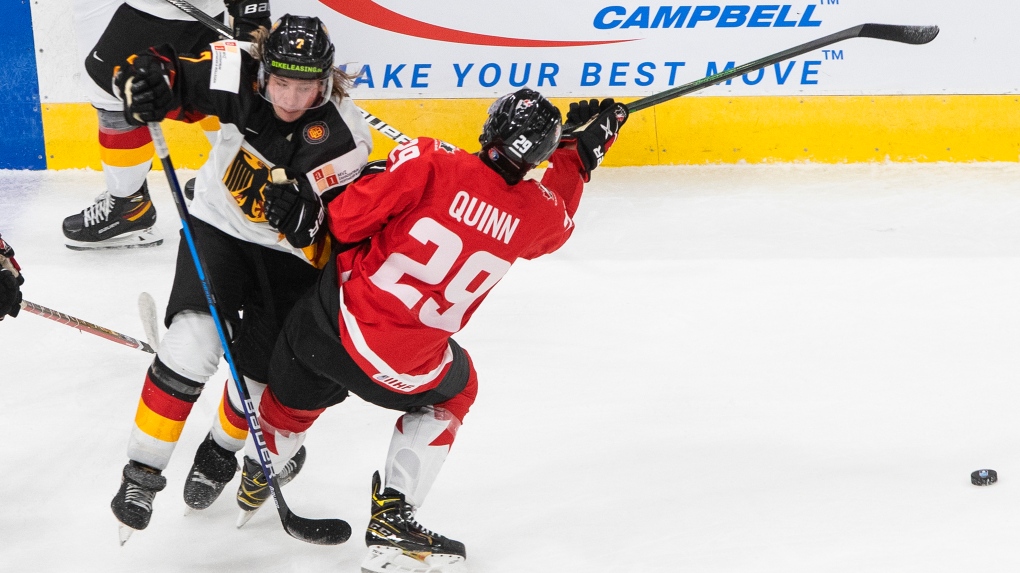 Team captain Elias is among those who will be counted for scoring in an effort to repeat last year’s historic quarterfinal achievement.

He recorded nine points in five games as part of the team’s first line last year with Peterka and Stutzle but will have to up his game this year without being alongside those NHL talents.

Elias is small, at only five-foot-eight inches tall but compensates with speed and stickhandling to create offensive chances.

The team from Czechia, formerly known as the Czech Republic, haven’t won a World Juniors medal since 2005 but appear likely to make at least the quarterfinals this year after being drawn in the same group as minnows Austria.

Centre Jan Mysak is the team’s likely captain and best player but the team’s forward ranks are otherwise a bit thin.

The defence has more depth and is headlined by NHL prospects Michael Krutil and Stanislav Svozil.

The Czechs are probably a step below the title contenders, but also have the talent to pull a quarterfinal upset. 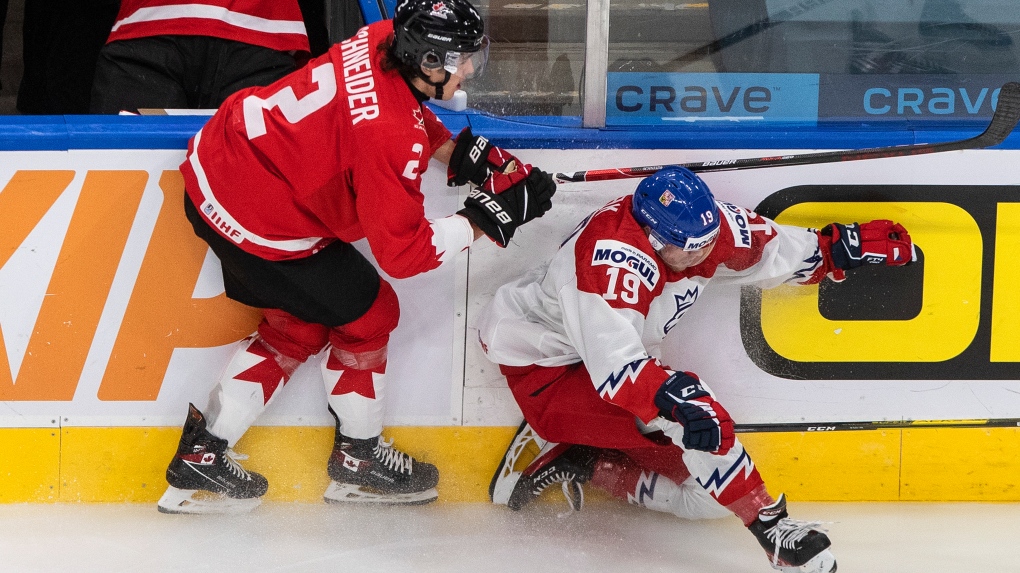 This will be the third World Juniors for the Montreal Canadiens draft pick who is noted for his speed and forechecking.

He’s averaged better than a point a game over his last two junior seasons with the Hamilton Bulldogs of the Ontario Hockey League.

He has also pro experience with the Canadiens, attending the team’s training camp this fall and appearing in 22 games last season for the club’s American Hockey League farm team.

Despite featuring top-10 draft pick Marco Rossi, the Austrians were outscored 29-1 over four games. They likely escaped relegation to Division IA after the IIHF cancelled the lower-division junior tournaments due to the ongoing pandemic.

Austria will need to salvage something in its game against the Czechia and Germany, but even then is likely to be in the best-of-three relegation playoff against either Slovakia or Switzerland. 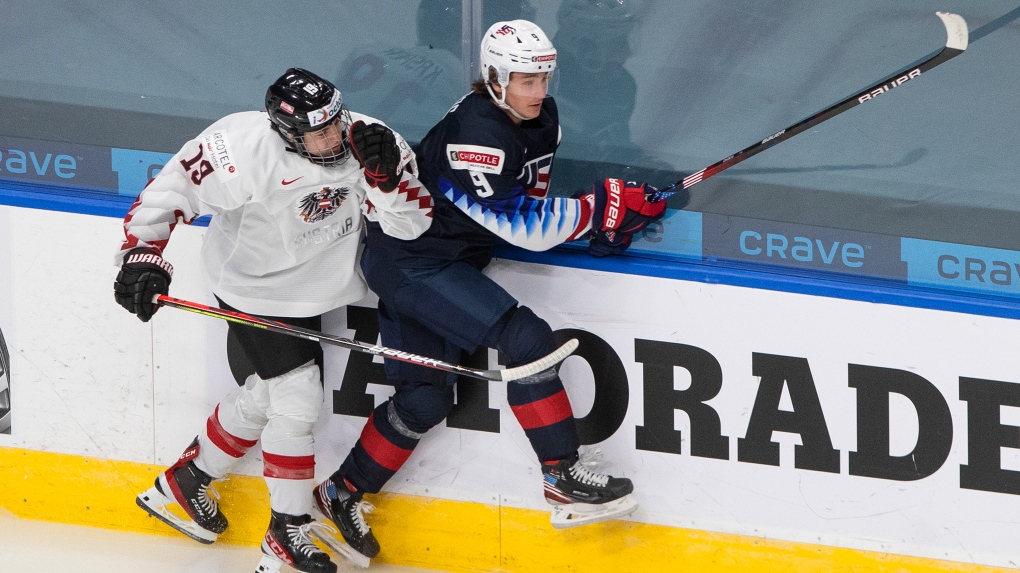 Kasper returns after making last year’s team at just 16 years old and most scouts have him as a top 30 prospect for next year’s NHL draft.

The six-foot-one centre is known for his skating and physical play and is already in his second season of pro hockey with Rogle BK of Sweden’s top senior league.

The team is without hard-luck prospect Thomas Bordeleau who misses out due to COVID-19 protocols for a second straight year.

On the blueline, the Americans have two top-five draft picks in Jake Sanderson (son of former Oiler Geoff Sanderson) and Luke Hughes, brother of former juniors stars Jack and Quinn.

There are questions about goaltending, but with an improved defence, Team USA is among the favourites to medal in Alberta this January. 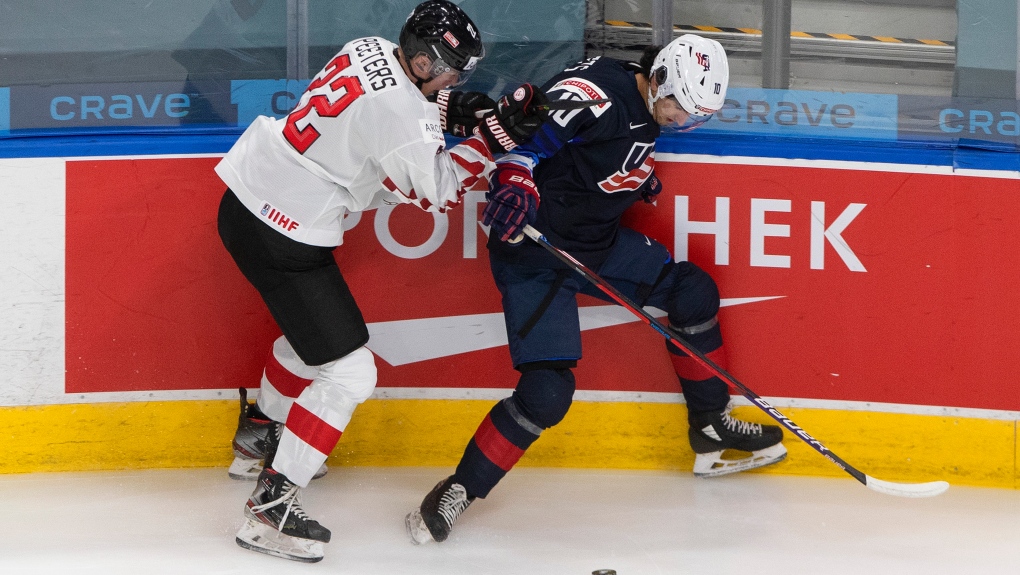 The second overall pick at last year’s draft (and first ever selection by the Seattle Kraken), Beniers played a third-line role on last year’s championship team, with three points in seven games.

He’s a high-energy, all-around player who’s played years above his age level throughout his junior career.

Beniers has averaged at least a point-per-game over parts of two seasons at the University of Michigan and brings strong playmaking and skating to Team USA.

Russia had an up-and-down start to its tournament last year, defeating the eventual gold medallist Americans but also getting shut out by the Czechs.

In an unexpected move, the team is only bringing Russian-based players to the tournament and leaving out a number of talented North American prospects, including Oilers draft pick Matvey Petrov of the Ontario Hockey League’s North Bay Battalion.

Defencemen Shakir Mukhamadullin and Kirill Kirsanov are veterans of last year’s team and will try to lighten the load for goaltender Yaroslav Askarov who will be playing in his third World Juniors.

The Russians have never missed the podium in back-to-back years. 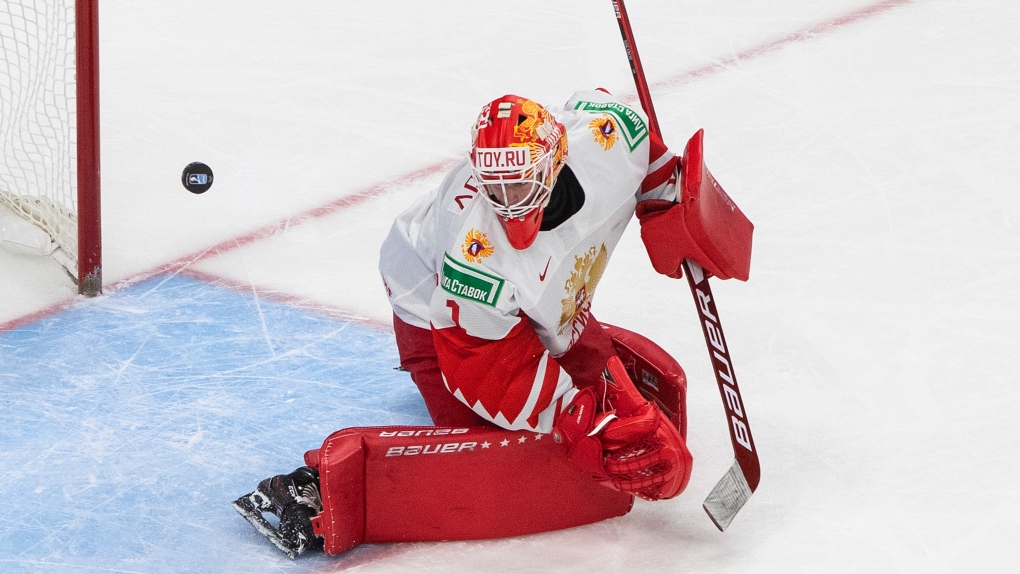 The 11th overall pick by the Nashville Predators in 2020, Askarov is hoping third time around will be the charm after coming up short against Canada in the 2020 gold medal game and getting blown out 5-0 by the hosts in the semifinal last year.

Scouts regard him as likely the most talented goaltender in the tournament due to his experience, composure and quick reaction time.

He can also rely on pro experience in Russia’s Kontinental Hockey League in an effort to end his World Juniors career on a high note.

Canada might be the favourites this year, but Team Sweden may not be far behind.

Their roster rivals both the Canadians and Americans in pure talent and the Swedes will be looking to reverse a medal-less streak when the event is held in Canada that stretches back the last four tournaments.

Goaltender Jesper Wallstedt got his feet wet at last year’s tournament and is expected to be among the top netminders at this year’s event. The Minnesota Wild first-round pick has two shutouts in 17 games this season playing in the Swedish Hockey League. 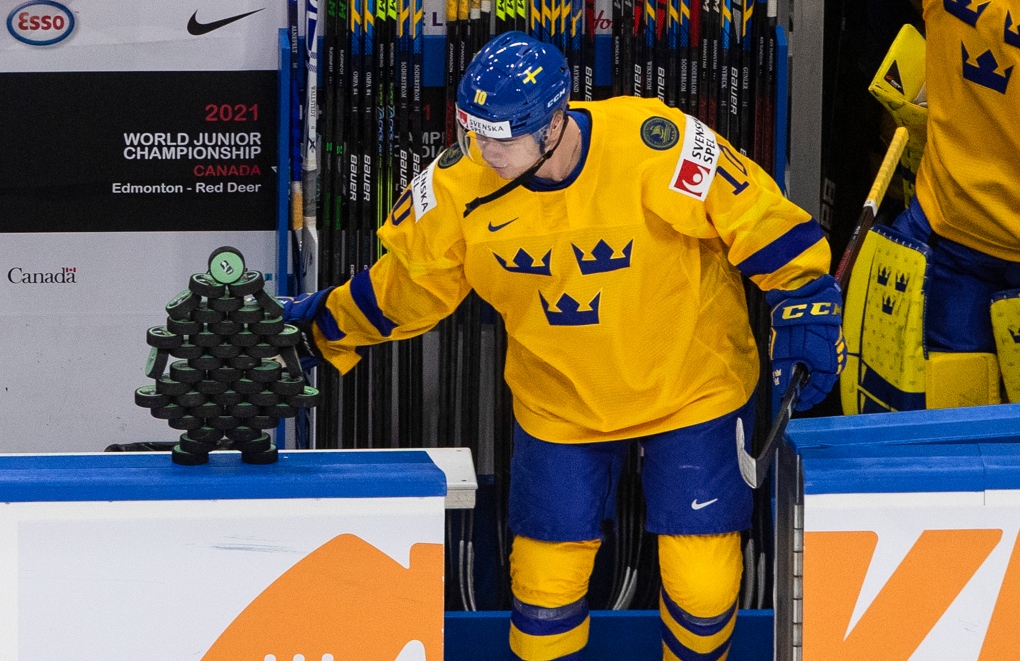 Holtz had three points in five games as part of last year’s squad and joins this year’s team after getting in six games with New Jersey Devils.

He’s a top-level goal scorer with a strong shot and who can play on the left or right wing.

This will be his third World Juniors and he’s likely to feature on Team Sweden’s top line and power play.

Team Slovakia doesn’t have the high-end offensive talent of the contending countries, but its top forward line will be led by returning L.A. Kings prospect Martin Chromiak who has 32 points in just 23 games for the Kingston Frontenacs of the Ontario Hockey League.

On defence, scouts will closely be watching 17-year-old Simon Nemec who had four assists on last year’s team and is considered a possible top-10 pick in next year’s draft. Blue Jackets prospect Samuel Knazko also returns to provide some stability at the back.

Slovakia’s tournament comes down to its group game against Switzerland with the loser likely heading to the best-of-three relegation playoff. 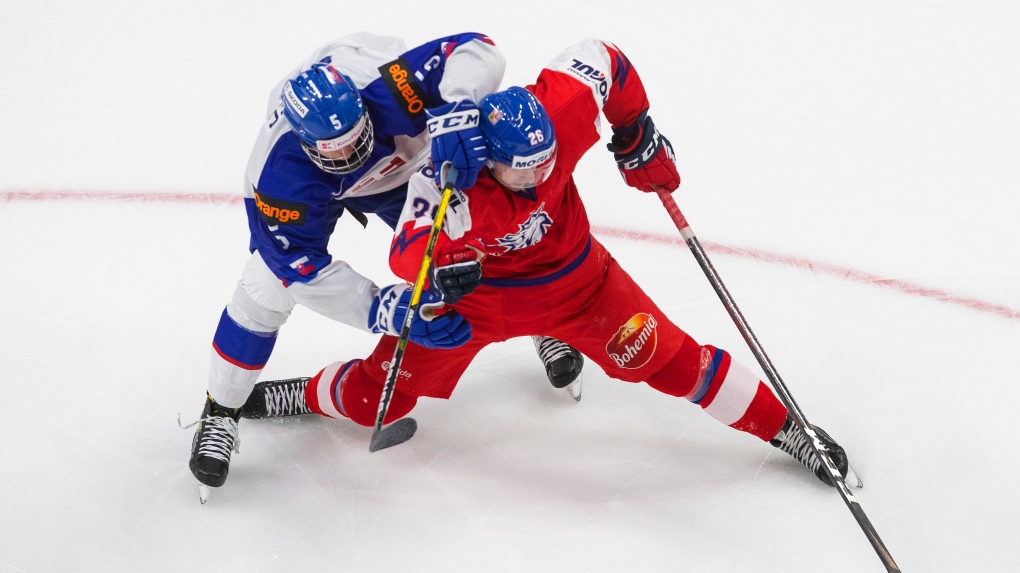 Nemec stood on his country’s World Juniors team at just 16 years of age last year and is widely regarded as a top-level NHL prospect.

Scouts love his skating and ability to create offence from the back paired with a strong defensive sense and positioning.

The slick defenceman is the youngest Slovak player to play in a top men’s league after consistently outperforming his age group at junior levels.

Last year’s Swiss side underwhelmed on the World Juniors stage, being outscored 20-5 and finishing ninth, its worst showing in five tournaments and a far cry from its bronze-medal game appearance in 2019.

This year could be a similar struggle as the team again lacks the depth and high-end prospects it’s enjoyed in the past.

Defenceman Lian Bichsel brings some NHL potential with the six-foot-five defenceman being ranked by most scouts among the top 30 defencemen at this year’s draft on the back of his size and skating ability.

At forward, Nashville Predators prospect Simon Knak returns for his third World Juniors. He’ll be looked to for offence along with 18-year-old Lorenzo Canonica, who is known for his slick stickhandling and is averaging nearly a point a game with the Shawinigan Cataractes of the Quebec Major Junior Hockey League.

Switzerland’s biggest game of the tournament will be its game against Slovakia in Red Deer on Dec. 30 with the loser likely bound for a relegation round playoff against Austria. 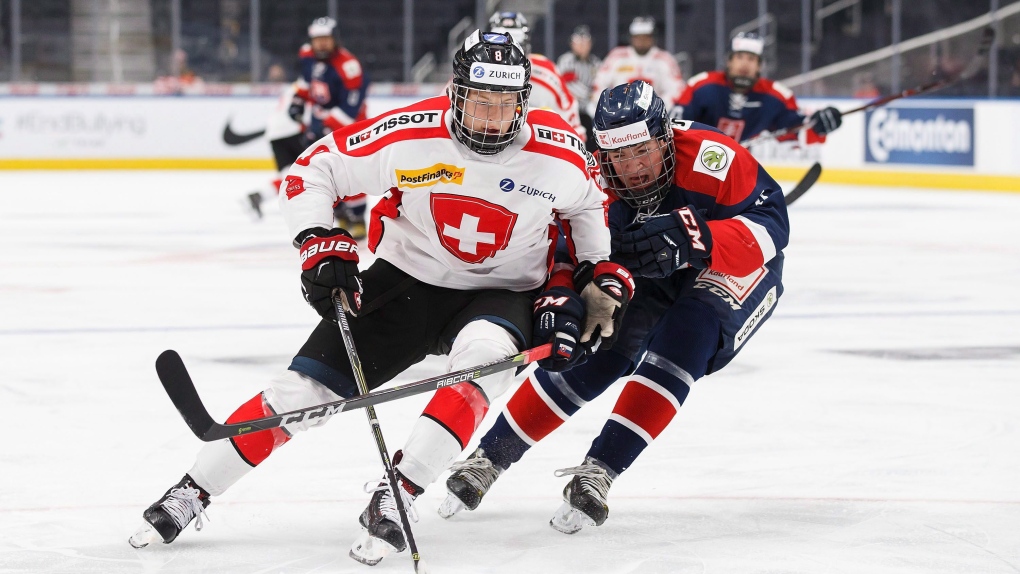 Switzerland’s Simon Knak (8) is chased by Slovakia’s Matej Ilencik (4) during third period Hlinka Gretzky Cup action in Edmonton on Wednesday, August 8, 2018. Slovakia won 5-3. THE CANADIAN PRESS/Codie McLachlanVeteran Knak joins the team after playing in the Swiss pro league at the start of the season and a year after racking up 29 points in 24 games for the Portland Winterhawks of the Western Hockey League.

He’s a checking forward who can frustrate the opposition’s breakout and is also fast enough to lead a counter-attack.

He finished in the top-10 for points among all WHL players in the shortened 2021 season.