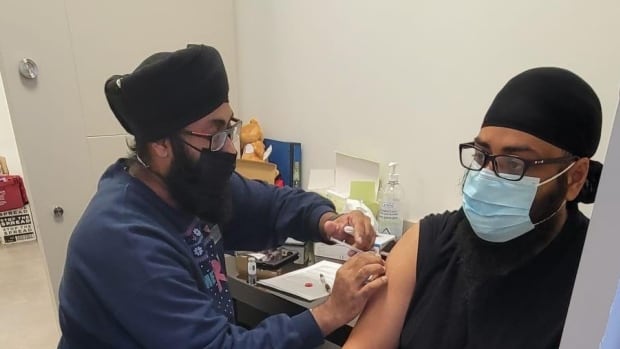 Pharmacist Manjeet Lotey was surprised when a 30-year-old Albertan called them to book a COVID-19 vaccine booster shot on Tuesday.

Lotey, who manages Edgemont Pharmacy in west Edmonton, explained that they couldn’t yet book for someone in that age group.

“No, they changed it,” the caller said.

Sure enough, on the Alberta Health website it was confirmed that anyone 18 and older was now eligible for their booster shot, as long as it had been five months since their second dose.

“It looks like we don’t know what we’re doing,” he said.

Right after, the phones started ringing – all four of them – and they never stopped.

Across Alberta pharmacies struggled to deal with a rush of COVID booster appointments along with high demand for rapid tests made available to the public four days earlier. That’s on top of regular appointments, calls for medications and prescriptions.

“Due to the more than 1,500 pharmacies and stakeholders (such the Alberta Pharmacists Association), the email took time to process,” he wrote in an email.

“Additionally, it could take some time before all staff in a pharmacy would be aware as they are most likely busy working and may not see the email in the inbox right away.”

Ghada Haggag, owner of All-Care Pharmacy in Capilano, said in the 21 years she has been working, she has never seen a week like this.

She said she had to keep deleting voice messages to make room for patients calling about their medications and doctors leaving verbal prescription orders.

“We missed too many calls and this is the problem — your voicemail is getting full in like every two hours, ” she told CBC’s Edmonton AM on Wednesday.

Ghada Haggag, the owner and pharmacist at All Care Pharmacy in the Capilano neighbourhood, shares her experience and advice regarding rapid tests and vaccine booster shots. 7:17

Alberta made rapid COVID-19 tests available to the public on Dec. 17, a day Lotey says in pharmacist circles is now sometimes referred to as ‘Black Friday’.

“It was just insane. I think the line-up, we are attached to a doctor’s office or clinic, and our lineup was actually through the whole doctor’s office,” he said.

Lotey said ideally they would have preferred a couple of days to prepare, but even a day’s notice in advance that the boosters were coming, would have been enough.

“For them to just open it up in the middle of a workday and just be like, ‘OK, now go book the shots,’ it’s unbelievable,” he said.

He also pointed at other provinces that were giving out the rapid tests in liquor stores and grocery stores and wondered why the province couldn’t do something similar.

“They were getting masks out at drive-thrus at McDonald’s, like they could do that with rapid test kits too,” he said.

Although they are burnt out, both Lotey and Haggag they have people relying on them that they cannot disappoint.

Haggag decided to keep her pharmacy open for the first time on Christmas Day.

“I know that like being a pharmacist or physician or nurse or health care working is very challenging right now, but it’s rewarding,” she said.