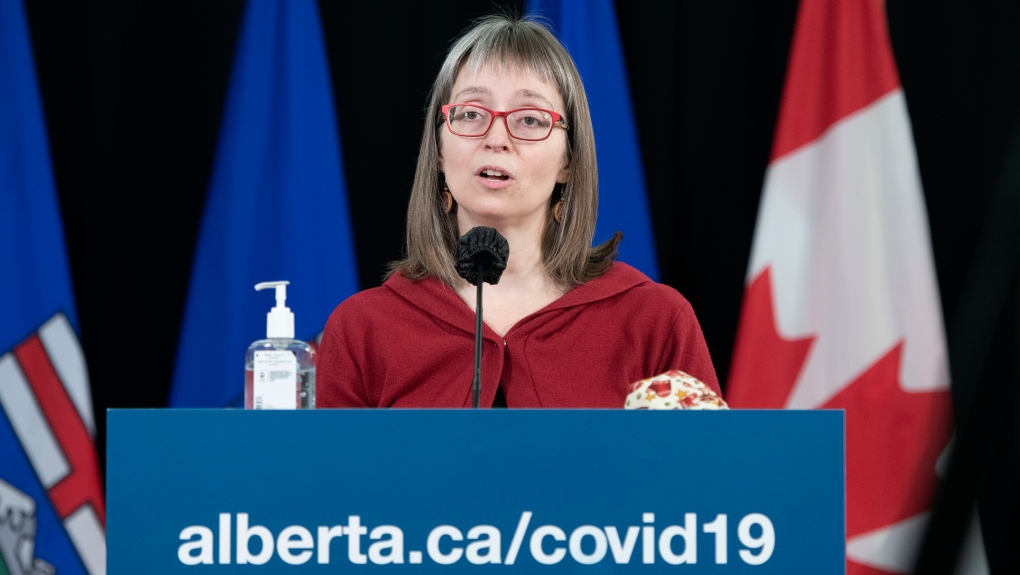 Alberta has recorded its largest daily increases in COVID-19 cases since the start of the pandemic, according to case estimates given by Alberta Health on Tuesday.

Dr. Deena Hinshaw provided new case estimates for the past five days, though cautioned they won’t be finalized until tomorrow.

The previous record-high case count was 2,433 reported on April 30.

Test positivity over the past five days ranged from 17 to 22 per cent, and were as high as 33 per cent in Edmonton and Calgary, according to Dr. Hinshaw.

Previous high marks for test positivity had been around 13 per cent.

“If you have symptoms you should stay home and away from others, even if you feel better,” she said.

“Please do not spend time with others if you are feeling sick, no matter what a rapid test result shows.”

Tuesday’s update was limited to new case counts and test positivity per cent. No data was made available regarding deaths, vaccinations, or the number of patients in hospital or intensive care units.

Full data will be updated on Wednesday and Dr. Hinshaw will return for another in-person availability the day after.

She warned that while the most recent data showed a slight decline in the number of patients in hospital, a continued high number of cases could push those numbers back up over the coming weeks.

“The fact that it’s relatively small numbers to date is not a guarantee of what we will or won’t see in the future.”

More than 7.5 million doses of COVID-19 vaccine have been administered across Alberta to date. Data shows unvaccinated Albertans are several times more likely to experience severe outcomes than those who have had two or more doses.

Full data will be updated on Wednesday and Dr. Hinshaw will return for another in-person availability the day after.

The next full data update is scheduled for Jan. 4.

Also Tuesday, Premier Jason Kenney said that a decision on students returning to school after the winter break won’t come until next week, but that his preference was for them to go back.

“We’re looking at what other jurisdictions are doing in terms of the plan forwards. It’s clearly our strong preference to maintain, as much as possible, in class instruction,” said Kenney.

“We think it’s important for the mental and emotional wellbeing of children, for their lifetime learning opportunities to maintain that stability with in-classroom instruction.”

Kenney added that in-classroom transmission of COVID-19 has not been a “major source of community transmission” but that the rapid rise of Omicron will affect the decision..

The rapidly changing landscape was also cited as the reason why the AHS website suggested kids showing symptoms should get PCR tests, when Hinshaw announced Tuesday that was no longer needed.

“When we made the change last week, we were following protocols for a number of new cases a day that were enabling us to still be following up with school-aged kids and those in daycares,” said Hinshaw.

“However with the surge in numbers and the volumes that we’re currently seeing, it’s not possible to maintain those individual follow up notifications and we expect the numbers to rise much more within the next several weeks.”