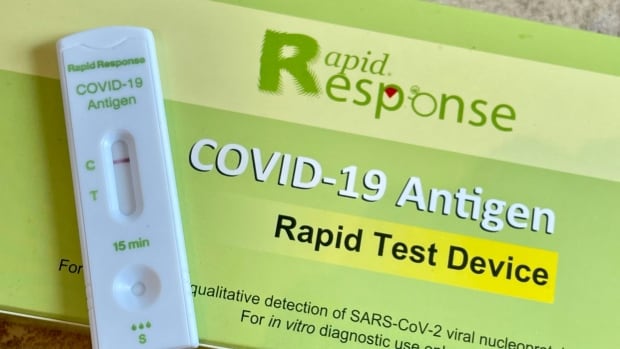 As COVID-19 cases surge in Alberta in a fifth wave driven by the more highly infectious Omicron variant, the province changed the criteria on Dec. 23 around who should get a polymerase chain reaction (PCR) test through Alberta Health Services.

With COVID cases doubling every two to three days instead of the weeks it took in previous waves, the province is urging people to take every precaution to stay safe and curb the spread.

But we don’t blame you if you’re having trouble following who should do what when, so we thought we’d help by breaking it down for you.

Who should still get a PCR test?

Dr. Deena Hinshaw, the province’s chief medical officer of health, said the changes on Dec. 23 aren’t meant to block Albertans from accessing free PCR testing but to ensure labs aren’t overwhelmed and can focus on the highest priority cases.

The government says only people who are at high risk of severe outcomes or work in high-risk settings need to book a followup PCR test if they get a positive result on a rapid antigen test.

Kindergarten to Grade 12 students, teachers and staff are also still eligible for PCR tests through Alberta Health Services if they test positive on a rapid antigen test.

People are also eligible if they’re at high risk of severe outcomes, such as people who have received immunosuppressive treatments to treat conditions such as cancer, rheumatoid arthritis, lupus or inflammatory bowel disease since December 2020.

What should I do if I’m symptomatic?

If you have COVID symptoms not related to a pre-existing condition and aren’t in one of the high-priority groups (see below) such people who work in health-care facilities or are in congregate living) — you should test yourself at home with a rapid antigen test kit.

The core COVID symptoms are fever, cough, shortness of breath, loss of taste or smell, sore throat or runny nose.

If you test positive on a rapid test, you should take as confirmation that you have COVID-19 and you are legally required to isolate for 10 days or until symptoms resolve, whichever is longer, as well as notifying all close contacts.

If your rapid test result comes back negative, you should still isolate and take another rapid test within 24 to 48 hours, the province says. A negative test result does not rule out infection.

Even if a second test comes back negative, you should continue to isolate until your symptoms are gone.

Close contacts of positive cases are no longer legally required to quarantine.

What if I’m not symptomatic but test positive on a rapid test?

If you test positive on a rapid antigen test but have no COVID-19 symptoms, you are required to isolate immediately.

If it’s negative, isolation can end unless you develop symptoms, the government says.

If it’s positive, you are legally required to continue isolating for 10 days or until symptoms resolve, whichever is longer. If your second test is positive, you must also notify all close contacts.

What if I’m not symptomatic, but fear I’ve been exposed or plan to attend a gathering?

Alberta no longer recommends PCR testing for those who are asymptomatic, instead recommending rapid antigen testing at home as above.

What if I have COVID-19 symptoms but don’t have access to a rapid test?

If you have COVID-19 symptoms, but don’t have access to a rapid antigen test, the province says you should consider yourself to have COVID and act accordingly: Isolate for 10 days and notify your close contacts.

What proportion of the number of infections will the revised PCR testing system actually reflect?

During Alberta’s fourth wave, it’s believed that about one in six cases were being caught by Alberta’s PCR testing system. Omicron’s vastly higher transmissibility means and the Dec. 23 changes to the testing protocols mean that a far smaller fraction of the true case count is reflected by the testing program. On Dec. 28, Hinshaw likened the PCR-confirmed case counts to “the tip of the iceberg.”

“PCR testing has always given only a general representation of the trend in infections, and it will continue to do that,” said Alberta Health spokesperson Steve Buick in an email to CBC News.

Why did the province change the testing strategy?

It comes down to capacity. Many other provinces are also moving in this direction as the fifth wave brings case count doubling times of just two or three days, compared with previous waves when it took weeks for doubling to occur.

“No one in Canada will be able to maintain PCR testing for every community case with mild symptoms,” Hinshaw said.

Alberta Premier Jason Kenney also defended the choice as a matter of necessity: “At the end of the day, there are limits. We are facing what looks like almost unlimited transmission right now, with Omicron. We have to make choices,” he said.

How will the province get any idea of case counts to inform public health policy?

Given that there will be even fewer formal records of positive test results for many Albertans, going forward, the province says it will rely more on wastewater surveillance and other monitoring systems to keep tabs on the pandemic’s spread.

The testing examines raw excrement for tiny genetic RNA fragments of the virus. Samples are taken several times a week from water plants.

“Wastewater provides high-quality surveillance data at [the] municipal level, and does not depend on individuals self-selecting to get tested,” Buick, the Alberta Health spokesman, said in his email.

University researchers have been testing wastewater over the past 17 months. Co-leads on the project say that while it can provide accurate information to identify communities with outbreaks, it can’t prevent the health-care system from getting overrun.

“The wastewater data itself cannot do that because we don’t know what is a proportion of the population that need to seek care,” said Dr. Bonita Lee, a co-lead at the University of Alberta.

What if I can’t get my hands on a rapid testing kit?

The Alberta government began supplying free take-home COVID-19 rapid antigen testing kits on Dec. 17. The government said the test kits were being offered on a first-come, first-served basis, with every Albertan eligible to pick up one box of five tests once every two weeks. They were supposed to be available through participating pharmacies in Edmonton, Red Deer and Calgary and through Alberta Health Services offices in other communities.

However, many locations ran out of stock within hours of them becoming available so many Albertans reported difficulty getting their hands on the kits.

Kenney acknowledged on Dec. 28 that demand for the tests has seen them disappear from pharmacies very quickly. He said another one million rapid testing kits have arrived and another three million kits will arrive next week.

The province has purchased 10 million more rapid tests in total.

However, if you are experiencing core COVID-19 symptoms and have yet to be tested, you should presume you are infected and begin isolating.

Who should get a booster shot of the vaccine, and which one is best?

All adult Albertans who have received their second COVID-19 vaccine more than five months ago can book a third shot.

Pfizer will be offered to Albertans aged 18 to 29 as a cautionary measure because studies have suggested the Moderna shot carries a slightly higher risk of causing myocarditis in younger people.

Hinshaw said a wide uptake on booster shots in Alberta will help slow the spread of Omicron.

People are advised to take whichever vaccine is made available to them rather than holding out for a preferred brand.

Hinshaw said Moderna and Pfizer use the same mRNA technology and both offer a high level of protection. She noted that she herself has had one each of the Moderna, Pfizer and Astra Zeneca shots.

“I want to assure Albertans that using vaccines in this way is safe and effective,” she said.

Will Omicron stretch the health-care system to over-capacity again?

Hospitalization rates have so far remained relatively stable as the Omicron-driven fifth wave builds, Hinshaw said on Dec. 28. However, she noted that hospitalizations are a lagging indicator. Alberta didn’t see a steep increase in hospitalizations until about a month into the fourth wave, she said.

“We will not know the impact that Omicron will have on our acute care system until later in January,” Hinshaw said.

“We will likely see hospitalizations rise in the coming weeks due to the exponential growth of the Omicron variant in our province.”

Some of the earliest data from around the world suggests that many people infected with the Omicron variant end up with milder symptoms. However, the sheer volume of cases caused by the hyper-transmissibility of the variant could still land scores of people in hospital, experts caution.