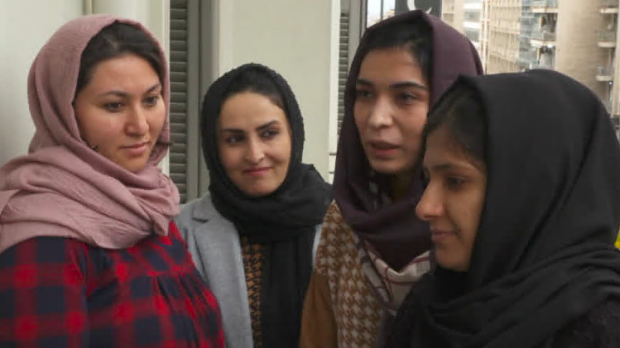 TORONTO — Canada will take in female Afghan judges and their families who have been living in limbo, primarily in Greece, since their evacuation from Afghanistan in the fall, a spokesperson for the immigration minister said Friday

In addition to the judges and their families, a group totalling about 230 people, Canada will also resettle an unspecified number of Afghans from the lesbian, gay, bisexual, transgender and queer communities who had been referred by a third-party aid organization, the spokesperson said.

They are expected to come to Canada next year but there is no firm date.

Canada has promised to resettle 40,000 Afghan refugees but has no timeline for doing so. Since the Taliban took control of the country after the U.S. troop withdrawal in August, Canada has resettled 3,915 Afghans with connections to the Canadian government and another 2,535 on humanitarian grounds, according to government figures.

Afghan women made great strides in the two decades since the Taliban last ruled the country from 1996 to 2001, joining previously all-male bastions such as the judiciary, the media and politics.

“All the achievements of 20 years came back to zero within the blink of an eye,” said Freshta Masoni, a family court judge staying in Athens with her toddler daughters.

Since returning to power, the Taliban pledged to protect women’s rights in accordance with Islamic law, announcing a general “amnesty” for all former state workers. But advocates fear a backslide to when women were not allowed to work and girls were banned from school.

Even if they can leave the country, Afghan asylum-seekers may face years of waits amid logistical backlogs and delays. Western countries usually resettle refugees referred by the UN refugee agency, which has limited capacity to process applications for resettlement.

“The biggest bottleneck there is the issue that referral partners in the region have not been able to ramp up capacity,” Canada’s immigration minister, Sean Fraser, told Reuters earlier this month. “These challenges are going to take a little bit of time to sort out.”

Unlike Syria, the Afghan crisis escalated rapidly during a global pandemic and many face difficulties leaving the country. Those who do leave face additional waits, often in countries with little capacity to support them.

Some of the female judges, who have been living in Greece since October https://www.reuters.com/world/asia-pacific/afghan-women-lawyers-run-face-life-limbo-abroad-2021-10-25, told Reuters they have lacked health coverage because of their temporary visa status.

Advocates have called on countries to resettle Afghans without requiring a designation from the UNHCR or other NGOs, a step Canada has signaled it is open to.