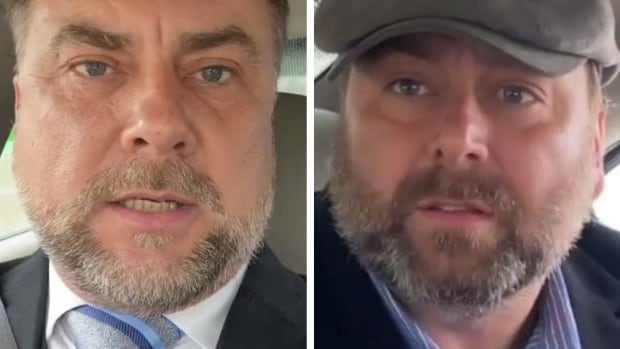 A Calgary-based street pastor and his brother — both known for being pandemic-denying and anti-mask — have been released on bail following their arrest after a protest outside the health minister’s house, their lawyer confirmed Sunday.

Calgary police say there was a protest in northwest Calgary Saturday afternoon, with about 50 people in attendance, and two had been arrested.

Haggerty confirmed the two were arrested after gathering outside Health Minister Jason Copping’s home. A video of the protest, posted on an anti-vaccine and anti-mask Facebook account, shows protest attendees in the residential neighbourhood holding signs and chanting while a helicopter can be seen flying overhead.

Haggerty said the two Pawlowskis had left the gathering and were returning home when they were stopped by police on Crowchild Trail, south of downtown.

He said they are charged with one count of breaching a judge’s order that restrained them from attending any illegal public gathering.

They were released by consent on the conditions that they have no contact with Copping and do not attend his residence.

Both brothers “readily agreed to be bound by these conditions,” said Haggerty.

Alberta Premier Jason Kenney issued a statement in response to the incident Sunday.

“All Albertans have a right to protest peacefully. That right does not extend to trespassing at private homes and harassing the families of public officials,” Kenney said in an emailed statement.

“Unfortunately, this is not the first time that fringe anti-vaccine conspiracy theorists have tried to intimidate government officials in this manner. I am sure that the vast majority of Albertans reject this kind of extremism.”

In October 2021, Court of Queen’s Bench Justice Adam Germain fined the brothers and put them on probation.

As part of their probation conditions, Germain ruled at the time that if the pandemic-denying, anti-mask leaders continued to preach to their followers, they must also present the perspective of medical experts.