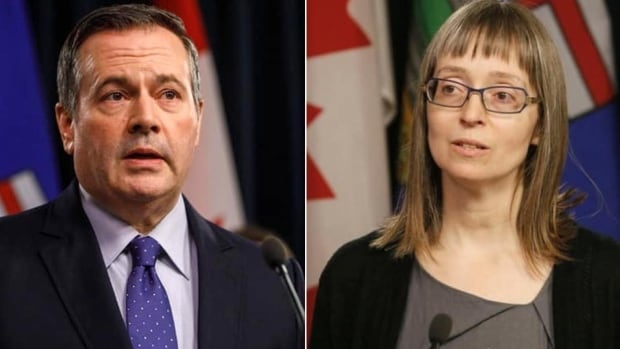 Alberta Premier Jason Kenney and Dr. Deena Hinshaw, the province’s chief medical officer of health, will provide an update on COVID-19 as the province grapples with the rapid spread of Omicron.

The news conference will begin at 3:30 p.m. MT. Watch it live here.

The last update on case numbers was issued Thursday, when Alberta reported an estimated 4,000 new cases of COVID-19, a record high for the province.

Alberta’s positivity rate was around 30 per cent, also a record rate for the province since the pandemic began 22 months ago.

As of Thursday, there were 371 people in hospital with COVID-19, including 48 in intensive care units.

Hinshaw said at a news conference Friday that there were about 21,000 active COVID-19 cases confirmed by PCR testing in the province but cautioned that the actual case count was no doubt much higher.

Albertans are being urged to skip PCR tests and instead use at-home rapid antigen testing or assume they have COVID if they’re symptomatic.

The wildfire spread of Omicron has pushed the province to cut back on lab-based testing, shorten the isolation period for infected Albertans, and expand third dose vaccinations while also putting a return to the classroom for K-12 students in limbo.

People in Alberta with at least two doses of vaccine who test positive for COVID-19 will now need to isolate for only five days instead of 10.

The change went into effect Monday in a bid to ease the impact of the new variant on the workforce. Some employers providing critical public services, such as healthcare, will be provided exemptions. The details of how those exemptions will be awarded are expected to be released Tuesday.

On Thursday, the province announced it was delaying the reopening of schools province-wide.

Winter break for K-12 students has been extended to Jan. 10. January diploma exams were also cancelled.

The delay will also be accompanied by the distribution of 8.6 million at-home rapid tests and medical grade masks.