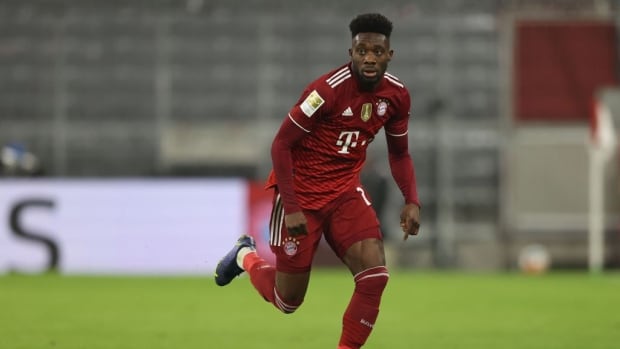 Edmonton native Alphonso Davies returned to training on Wednesday, one week after testing positive for COVID-19.

Davies, the Bayern Munich star, is scheduled to play World Cup qualifiers with Canada in Honduras (Jan. 27), at home to the U.S. in Hamilton (Jan. 30) and in El Salvador (Feb. 2).

Bayern said Jan. 5 that the 21-year-old fullback had tested positive but was well and self-isolating at home. Bayern returned to training Jan. 3, 17 days after its last competitive match of 2021 — a 4-0 win Wolfsburg.

Of the other nine players that have been in COVID protocol for the last week, only defender Lucas Hernandez remains in isolation, with Kingsley Coman and Corentin Tolisso already leaving quarantine.

Bayern was defeated 2-1 by Borussia Moenchengladbach on Friday, and have their next game scheduled Saturday at Cologne.

KHL to suspend season for 1 week due to COVID cases

The Russia-based Kontinental Hockey League, a key source of players for Olympic teams, decided Wednesday to suspend its season for a week because of coronavirus outbreaks at many clubs.

The KHL said it will stop play from Saturday and resume on Jan. 22. The league said it knew of positive tests for 124 players around the league as of Tuesday morning, with 27 of those cases reported within the previous 24 hours.

After the NHL withdrew from the Olympics last month, the KHL became crucial to assembling national teams for next month’s Beijing Games.

Gold-medal favourite Russia and host nation China are both expected to send squads of KHL players. Most of the other nations in the 12-team Olympic men’s tournament are expected to call on at least some players from the KHL.

Paris Saint-Germain have postponed their Qatar winter tour as COVID-19 cases continue to rise, the French club said on Wednesday.

France registered a record of nearly 370,000 infections on Tuesday, while the seven-day average of new infections set a new high of more than 283,000.

“In view of the health situation in France, Paris Saint-Germain has decided to postpone the Qatar Winter Tour 2022 to protect the health of its staff and players,” the club said on its website.

PSG were due to hold a three day mini-training camp in the Gulf state between Jan 16-18 followed by a match against a local team in Riyadh on Jan. 19.

The French club have reported a flurry of COVID-19 cases this month, with several players, including forward Lionel Messi, testing positive for the virus.

The Premier Hockey Federation is shifting its 2022 All-Star Showcase to Buffalo, New York, as a result of COVID-19 restrictions in Toronto, which would have severely limited the number of fans being able to attend.

The All-Star Showcase is still scheduled to be played on Jan. 29, the league announced Wednesday. The PHF said Toronto will now be scheduled to host next year’s event. Toronto originally was chosen as host this year to coincide with the expansion Toronto Six playing their first season at home.

The Six were established in 2020 but spent their first season with the league’s five other teams competing in a shortened schedule at Lake Placid, New York, due to the coronavirus pandemic.

Buffalo, which is home to the Beauts, will become the first two-time host of the event. The city was home to the All-Star Game of the since re-named National Women’s Hockey League in its inaugural 2015-16 season. That first game was held in Buffalo’s downtown Harborcenter, while this year’s game will be played at the multi-rink Northtown Center in suburban Buffalo.

This year’s showcase will feature All-Stars split into three teams competing in a round-robin format, with the most goals determining the champion.