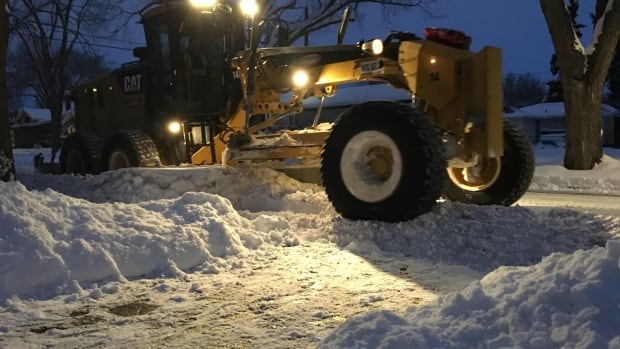 City of Edmonton crews are  looking forward to a warm reprieve after a gruelling three weeks of extreme weather left intersections and arterial roads treacherous for drivers and pedestrians.

Andrew Grant, the city’s general supervisor of snow and ice removal and control, said it was all hands on deck and more during the deep freeze.

“We called in all of our additional staff throughout the holidays to get in vehicles, to get in our sanders and get out there,” Grant said in an interview Tuesday. “We had to throw everything we had at it.”

In extreme cold temperatures, it’s difficult to get sand to stick, he said. Crews use an aggregate material, a mixture of fractured rock chip and sand, and serrated ice blades to scarify the surface so the aggregate material stays, Grant explained.

Between mid-October and the first week of January, the city used 25,000 metric tonnes of sand.

Coun. Andrew Knack said he doesn’t normally get complaints about snow clearing for arterial roads but he did last week during the deep freeze.

“This did feel like a bit of an anomaly,” Knack said. “I typically don’t hear those concerns on the arterial roads on a consistent basis, so my hope is that this is the first and only time we see something like that for winters to come.”

Most complaints were about 170th Street. Knack said he drove down the road and agreed the conditions were less than ideal.

Knack said the city should improve how it communicates its struggles to the public.

“I know there are folks out there working tirelessly,” Knack said of plow crews. “If there are reasons why some of the tools they have aren’t effective, let’s get that information out there. Let’s share it with people.”

Some residents were fired up on social media about the slippery conditions on arterial roads.

It’s like winter is a surprise to our winter city, every single year. Our roads are in embarrassingly poor state. I’m continually disappointed in our cities approach to snow and ice.


Very disappointed with the roads this winter. We can blame the cold all we want but for a city located where Edmonton is, we need a better solution.

“When you leave out that communication element, you create a narrative of, ‘The city’s not doing anything,'” Knack said. “There were a lot of us left scratching our heads: ‘What’s happening here?'”

Grant said with the warmer weather, the snow and ice will loosen up in the next few days.

He admitted it’s going to get messy but it will be easier for crews to clean that up.

“They’re monitoring the conditions on those roadways, they’re plowing the slush off to the side of the road and hopefully we’ll have some clear roadways over the next few days.”

Knack suggests the city should bolster its own fleet in addition to contractor equipment.

He’s asked for a report from administration outlining service standards and potentially expanding the city’s own equipment.

“I expect actually that we are going to need to purchase additional equipment to have more in house,” Knack said. “By doing that, we can actually set a higher standard for ourselves in terms of how quickly we’re clearing and maintaining arterial roads, collector roads, our local roads, our alleys.”

Council is expecting that report in April, ahead of the next budget session that starts in fall 2022.