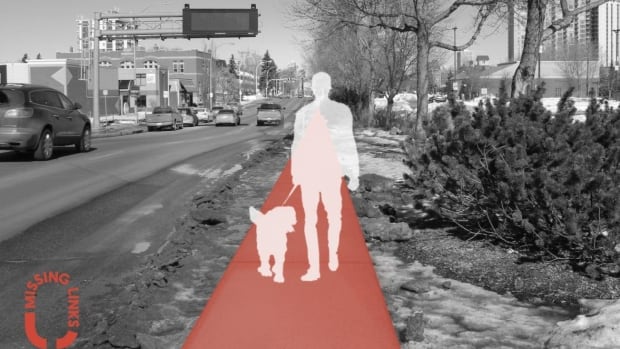 A significant portion of Edmonton’s 100 kilometres of missing sidewalks will be filled in the coming two years after city council approved $4 million in 2022 and 2023 to get the work done.

Michael Janz, councillor for Ward papastew, won support from his fellow councillors in December to amend the capital budget to include the funding.

The initiative is meant to address nearly 100 kilometres of missing sidewalk spaces, unsafe crossings and gaps in bike paths, he said.

“The problem with missing links is you’ll have a sidewalk that just stops and then it’s road,” Janz said in an interview with CBC News Wednesday.

Portions of the sidewalk along Calgary Trail, for example, drop off and force people into a parking lot before they can get back on the sidewalk.

He said the pockets of missing sidewalks need to be filled to improve accessibility.

“This will allow more Edmontonians to move more quickly through our city in a safe and connected way.”

Construction could start this spring.

Paths for People, a group that advocates for safer and more accessible multi-use paths, launched a project in 2019 called Missing Links, and identified some 200 issues related to gaps in sidewalks, crosswalks and bike routes.

“It’s needed everywhere because our active transportation system is a little bit like Swiss cheese, like there’s just holes all over the place.”

Council also approved $750,000 for planning and design of larger swaths of sidewalks in high traffic and pedestrian areas.

Those include Fort Road from 127th to 153rd avenues; 105th Avenue from 101st to 97th streets; 106th Street from Princess Elizabeth Avenue to 118th Avenue; and 127th Street from Yellowhead Trail to 137th Avenue.

The planning money will also look at connecting neighbourhoods of Bonnie Doon, Strathearn, Holyrood and Idylwyld with existing LRT grid as well as bike and river valley paths and do the same analysis for neighbourhoods around the Northlands/Exhibition lands.,

Janz said building active pathways is a more efficient use of money.

“The cost of a sideway or a pathway is relatively minor compared to the cost of an interchange,” Janz noted. “So it’s a very small amount of money but it can make a huge difference to the safety and accessibility and enjoyment for Edmontonians.”

Janz said the project follows the city’s vision to create 15-minute communities, where anything the average person may need is within a 15-minute walk or drive from their home.

“If we’re serious about building a city that stops urban sprawl, that builds up, not out,” he said, “We need to make sure that it’s easy and safe to move, whether you’re eight years old or you’re 80 years old.”

The initiative contributes to the city’s climate goals, he said, and ensures people can get out and enjoy the outdoors safely.

“I think with the pandemic raging, more and more people have rediscovered the river valley and rediscovered how to move quickly through the city and explore their own neighbourhood.”

The current snow and ice removal system is flawed, he said, and improving the infrastructure could include re-jigging how the city clears sidewalks and pathways.

“It’s an exciting direction to head in, we just want to make sure that we get all four seasons working really well,” Raitz said.