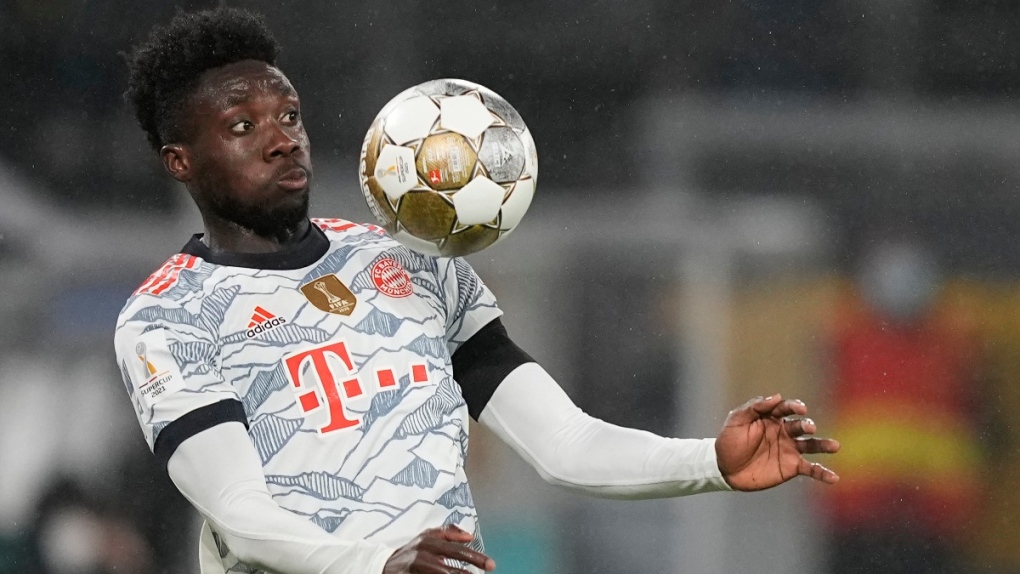 Alphonso Davies’ return from a bout of COVID-19 has been put on hold with Bayern Munich saying the Canadian star shows signs of an inflammation of the heart muscle.

The 21-year-old from Edmonton has been sidelined, with his participation in doubt for Canada’s World Cup qualifiers later this month.

Bayern manager Julian Nagelsmann told a pre-match news conference Friday that the problem was detected in the follow-up examination that all players who have had COVID undergo.

“He’ll sit out training until further notice. He won’t be available, also in the coming weeks,” Nagelsmann said in German.

“The ultrasound shows this myocarditis isn’t so dramatic but it’s a sign of myocarditis. Still, it has to heal and that will definitely take some time,” he added.

Myocarditis is a mild, temporary condition in the vast majority of cases, according to experts.

Asked if the myocarditis was due to COVID, Nagelsmann said it’s hard to tell.

“There are different reasons, especially viral load or the flu, for instance, that can cause cardiac problems,” he said through an interpreter.

“That occurred pre-Corona to other players. Now the probability is higher if you combine Corona and top athleticism, that might cause other problems. But that’s not relevant for us right now. It’s not relevant to the treatment. It doesn’t matter if Alphonso Davies had this from the flu or Omicron-Delta or whatever. That’s not really the decisive factor.

“The situation is that it’s absolutely awful, terrible. What can I say? A bad situation for us.”

Bayern said last week that Davies had tested positive and was feeling well while isolating at home. He was one of six Bayern players who returned to training Wednesday after COVID bouts.

Nagelsmann said Davies would now stop training until further notice to give his body time to recover. Bayern plays Cologne on Saturday.

Viewed as one of the finest left backs in the world, due to his pace and attacking flair, he plays in a more offensive position for Canada.

The Canadian men, bidding to qualify for the World Cup for only the second time ever, currently top the final round of qualifying in CONCACAF with a 4-0-4 record. They have six games remaining.

Come March, the top three teams in the eight-team round robin will represent North and Central America and the Caribbean at Qatar 2022. The fourth-place team will take on an Oceania country in an intercontinental playoff to see who joins them.

A depleted Bayern lost to 2-1 Borussia M├╢nchengladbach on Jan. 7 following the winter break, but still tops the German standings at 14-3-1.

Manuel Neuer, Dayot Upamecano, Omar Richards, Leroy Sane and Tanguy Nianzou will all be back in the weekend match-day squad following their COVID infections.

“None of them are 100 per cent fit. Some of them had symptoms. They’re back in the squad, but none except Manu are ready to start or play for long,” Nagelsmann said.

Leon Goretzka and Kingsley Coman will both be absent for the Cologne game. Goretzka is recovering from a knee issue while Coman was dealing with a muscular injury prior to COVID.

This report by The Canadian Press was first published Jan. 14, 2022