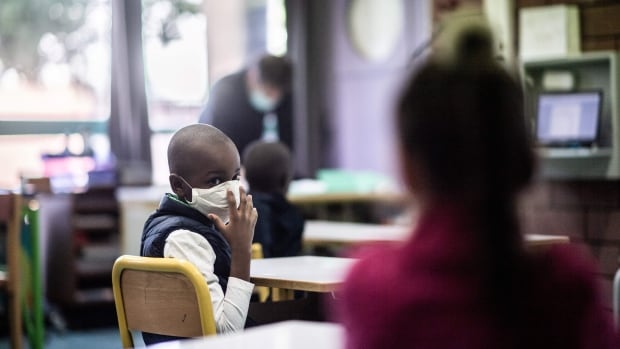 The Omicron variant has left Edmonton-area classrooms dealing with the most challenging staffing issues in the pandemic.

Staffing levels are the worst she’s seen in her 20 years with the district, Power said.

About 10 per cent of staff are absent, compared to about one per cent normally away, she said.

The number of absences are growing.

Schools have had to move around staff including principals, assistant principals and even consultants to lead classes, Power said.

“Whatever we can do to cover those classes, we’re doing it,” she said.

We discuss what the rising number of teachers with COVID means for students who are back in class. 6:07

The numbers are similar in Edmonton with the latest figures showing 619, or 10.9 per cent, teachers and 20 per cent of educational assistants absent in public schools.

Of those, 97 teachers’ spots were unfilled.

On Tuesday last week, there were 644 staff absent, 335 of them teachers, at Edmonton Catholic schools. Of those teaching positions, 69 were unfilled.

“We understand many other school divisions are facing significant challenges in staffing but, for now, we are holding our own,” McNabb said in email.

“Most schools are without at least one teacher substitute each day,” Devendra Kumar, division spokesperson, said in an email.

For Black Gold, the shortages are comparable to previous waves, but worse than a regular flu season, Kumar said.

Finding substitute teachers has been a challenge for schools.

“I’ve talked to teachers even outside of Calgary, in Edmonton, in smaller rural areas where they’re running out of substitute teachers,” said Jason Schilling, president of the Alberta Teachers’ Association.

While some substitutes are getting sick, others are not comfortable coming in.

Those available to work are often signed up with several districts.

The association has been working to get substitute teachers on contract income and benefit security, Schilling said.

“If they were to happen to become sick themselves, they would be able to access those benefits that other teachers have because right now they can’t,” he said.